Evaluation of Thoracic Response in Side Impact Crash 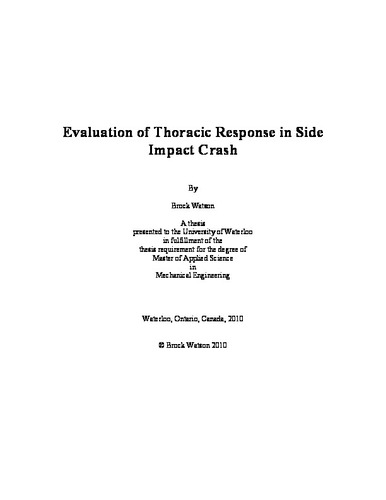 Mitigating injury in side impact has been an important topic of research for decades. In the mid 1980’s the American government began a program intended to improve the crashworthiness of vehicles in side impact. This program ultimately led to the introduction of a dynamic side impact test (Federal Motor Vehicle Safety Standard (FMVSS) 214), which new vehicles must pass, along with a very similar test aimed at consumer awareness (New Car Assessment Program (NCAP) side impact test). The work presented in this thesis involved the study and simulation of these tests to evaluate occupant response in side impact, with a focus on the thoracic response. In the first portion of the work presented here, an in-depth study of the National Highway Traffic Safety Administration (NHTSA) crash test database was performed. In this study the results of the side impact crash tests of 72 vehicles were examined to understand the general trends seen in this type of testing with regards to vehicle velocity, side intrusion, and occupant injury prediction. A series of average velocity profile curves was created from accelerometer data at 18 measurement points on each vehicle crash tested. Additionally the injury criterion measured by the front seat occupant was plotted against several vehicle variables (such as mass and occupant arm to door distance) to study the effect these variable had on the injury predicted by the occupant. No single variable was shown to have a strong correlation to injury, although increasing door intrusion distance, peak lateral velocity, the Head Injury Criterion (HIC), and pelvic acceleration were found to positively correlate to thoracic injury. In addition, increasing vehicle model year, vehicle mass, and arm to door (AD) distance showed negative correlations with thoracic injury. Following the survey of the NHTSA database, a finite element model of the NHTSA side impact test was developed. This model included a full scale Ford Taurus model, a NHTSA barrier model and three side impact anthropometric test device (ATD) occupant models, each representing a different 50th percentile male dummy. Validation of this model was carried out by comparing the simulated vehicle component velocity results to the corridors developed in the NHSTA crash test database study as well as comparing these velocities, the vehicle deformation profile, and the occupant velocity, acceleration and rib deflection to several Ford Taurus crash tests from a similar vintage to the finite element model. As this model was intended as a ‘baseline’ case to study side impact and occupant kinematics in side impact, side airbags were not included in this model. A lack of experimental data and a lack of consensuses within the automotive crash community on the proper method of modeling these devices and their effectiveness in real world impacts also led to their exclusion. Following model validation, a parametric study was carried out to assess the importance of the initial position of the occupant on the vehicle door velocity profile and the predicted occupant injury response. Additionally the effect of the door trim material properties, arm rest properties and the effect of seat belt use were studied. It was found that the lateral position of the occupant had an effect on the door velocity profile, while the vertical and longitudinal position did not. The use of seatbelts was shown to have no significant effect in these simulations, due to minimal interaction between the restraint system and occupant during side impact. Furthermore, there was a general decreasing trend in the injury predicted as the initial position of the occupant was moved further inboard, down and forward in the vehicle. Stiffer interior trim was found to improve the injury prediction of the occupant, while changing the material of the foam door inserts had no effect. It was found that in general the occupant remained in position, due to the inertia of the occupant, while the seat began moving towards the centerline of the vehicle. Future considerations could include more advanced restraint systems to couple the occupant more effectively to the seat, or to develop side interior trim that engages the occupant earlier to reduce the relative velocity between the occupant and intruding door. Overall, the model correlated well with experimental data and provided insight into several areas which could lead to improved occupant protection in side impact. Future work should include integrating side airbags into the model, widening the focus of the areas of injury to include other body regions and integrating more detailed human body models.