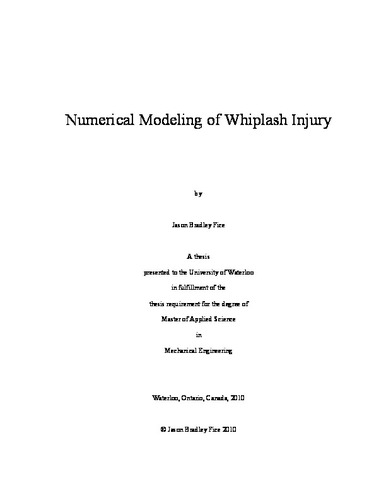 Soft tissue cervical spine (neck) injuries, known as ‘whiplash’, are a leading cause of injury in motor vehicle collisions. A detailed finite element (FE) model of the cervical spine that is able to predict local tissue injury is a vital tool to improve safety systems in cars, through understanding of injury mechanisms at the tissue level and evaluation of new safety systems. This is the motivation for the formation of the Global Human Body Models Consortium, which is a collective of major automotive manufacturers with the goal of producing a detailed FE human body model to predict occupant response in crash. This work builds on an existing detailed cervical spine model, with a focus on improved validation in terms of kinematics and tissue level response. The neck model used in this research represents a 50th percentile male and was developed at the University of Waterloo. The model includes both passive and active musculature, detailed nucleus and annulus models of the discs, rate dependent non-linear ligaments, facet capsules with a squeeze film model of the synovial fluid, and rigid vertebrae with the geometry derived from CT scans. The material properties were determined from published experimental testing and were not calibrated to improve the model response. The model was previously validated at the segment level. In this study, the model was validated for tension loading, local tissue response during both frontal and rear impacts, and head kinematic response during frontal and rear impact. The whole neck model without musculature was exposed to a tensile load up to 300N and the predicted response was within the experimental corridors throughout. The ligament strains and disc shear strains predicted by the model were compared to bench-top cadaver tests. In frontal impact, the ligament and disc strains were within a standard deviation of the experiments 26/30 and 12/15 times respectively. In rear impact, the strains were within a standard deviation of the experiments 9/10 and 12/15 times for the ligaments and discs respectively. All of the ligament strains were within two standard deviation of the experimental average and the disc strains were all within three standard deviations. The global kinematic response of the head for 4g and 7g rear impacts and 7g and 15g frontal impacts was generally a good fit to the experimental corridors. These impact loads are relevant to the low speed impacts that generally cause whiplash. In the global kinematic validation, the model was shown to oscillate more, which is likely due to the lack of soft-tissues such as the skin and fat or the lack of high-rate material data for the intervertebral discs. In rear impact, the head over extended by 17° and 6° for 4g and 7g impacts respectively; this is likely due to difficulties defining the facet gap or lack of uncovertebral joints. Even with these limitations the model response for these varied modes of loading was considered excellent. A review of organic causes of whiplash revealed the most likely sources of whiplash include the capsular ligament, other ligaments, and the vertebral discs. The model was exposed to frontal and rear impacts with increasing severities until the soft tissue strains reached damage thresholds. In frontal impact, these strains started to reach damage values at a 15g impact. The disc annulus fibres were likely injured at 10g in a rear impact, and the ligaments were likely injured at 14g in a rear impact. These impact severities agree with findings from real-life accidents where long term consequences were found in rear impacts from 9g to 15g. The model was used to show that bench-top cadaver impacts under predict strain because they lack active musculature. A number of recommendations have been proposed to improve the biofidelity of the model including perform in-vivo measurement of human facet gaps, incorporate the uncovertebral joints, measure rate-dependent properties for the annulus fibrosus of the disc, include non-structural soft tissues for increased damping, determine a muscle activation strategy that can maintain head posture in a gravity field, and continue to develop relationships between prolonged painful injury and strain in structures of the neck other than the capsular ligaments. Furthermore, it was recommended that the model should be developed further for whiplash injury prediction with out of position occupants.