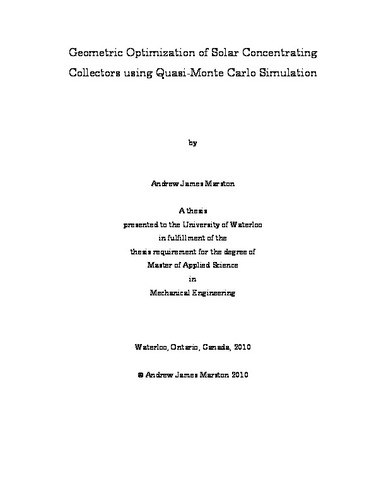 This thesis is a study of the geometric design of solar concentrating collectors. In this work, a numerical optimization methodology was developed and applied to various problems in linear solar concentrator design, in order to examine overall optimization success as well as the effect of various strategies for improving computational efficiency. Optimization is performed with the goal of identifying the concentrator geometry that results in the greatest fraction of incoming solar radiation absorbed at the receiver surface, for a given collector configuration. Surfaces are parametrically represented in two-dimensions, and objective function evaluations are performed using various Monte Carlo ray-tracing techniques. Design optimization is performed using a gradient-based search scheme, with the gradient approximated through finite-difference estimation and updates based on the direction of steepest-descent. The developed geometric optimization methodology was found to perform with mixed success for the given test problems. In general, in every case a significant improvement in performance was achieved over that of the initial design guess, however, in certain cases, the quality of the identified optimal geometry depended on the quality of the initial guess. It was found that, through the use of randomized quasi-Monte Carlo, instead of traditional Monte Carlo, overall computational time to converge is reduced significantly, with times typically reduced by a factor of four to six for problems assuming perfect optics, and by a factor of about 2.5 for problems assuming realistic optical properties. It was concluded that the application of numerical optimization to the design of solar concentrating collectors merits additional research, especially given the improvements possible through quasi-Monte Carlo techniques.