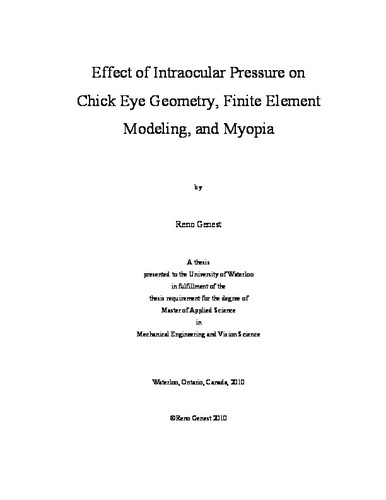 In most cases, myopia is characterized by an increase in axial length of the eye, but the exact mechanisms for the axial elongation are still unknown. Higher intraocular pressure (IOP) has been associated with myopia and could be involved in eye enlargement. Also, some investigators have argued that the mechanical stresses generated by the ocular muscles during near work cause the eye to stretch out of shape. The purpose of this work was to investigate the effect of IOP on eye geometry, build a finite element model of the corneo-scleral shell of a chick eye, and verify if the eye could elongate due to increased IOP and hence become myopic. In the present study, myopia was induced in the right eye of chicks using -15 dioptre (D) goggles. The in-vitro pressure-volume curves of normal and myopic chick eyes were obtained using a computer controlled syringe pump and a digital pressure gauge. The axial length and horizontal equatorial diameter of the chick eyes as pressure increased were measured from digital photographs. To build the finite element model, normal chick eyes were frozen, sliced using a microtome, and photographed. The image sequence was aligned using MATLAB software and imported into SolidWorks® and Mimics software packages for three-dimensional (3D) reconstruction. Three 3D models were constructed and imported into Abaqus/CAE® software for finite element analysis. Isotropic, homogeneous, linear elastic and exponentially stiffening material properties were used for the finite element models. The results of the finite element models were compared with the experimental data. The results showed that normal chick eyes elongated in the axial direction and initially contracted in the horizontal equatorial direction as IOP increased. Myopic chick eyes did not elongate as much in the axial direction and did not contract as much in the horizontal equatorial direction compared with normal eyes. The volumetric deformation of myopic eyes was similar to normal eyes suggesting that growth and remodelling of the ocular tissues was involved in experimental myopia in the chick. The 3D reconstructed geometry of a chick eye was similar to a real eye although small geometric inaccuracies were present. The finite element model with isotropic, homogeneous, and exponentially stiffening material properties agreed well with the experimental strains in spite of the fact that the anisotropy of the ocular tissues was not included in the finite element model. This suggests that the oblate geometry of the chick eye was the main parameter dictating its deformation under increased IOP. The natural tendency of chick eyes is to elongate in the axial direction as IOP increases and this suggests that IOP could play a role in myopia onset and progression. The way chick eyes deformed as pressure increased is probably due to their oblate geometry. The finite element model could be used in the future to study the effect of different parameters such as ocular muscle forces and ocular tissues material properties on eye geometry. This way, an eye configuration more prone to eye elongation and myopia could be determined.