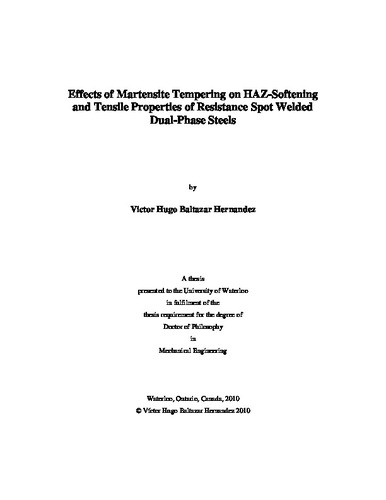 The main purpose of this thesis is to improve the fundamental knowledge of non-isothermal tempering of martensite phase and its effects on the reduction in hardness (softening) with respect the base metal occurring at the heat affected zone (HAZ) of resistance spot welded dual-phase (DP) steels. This thesis also aims at understanding the influence of HAZ-softening on the joint performance of various DP steel grades. The tempering of martensite occurring at the sub-critical HAZ (SC-HAZ) of resistance spot welded DP600, DP780 and DP980 steels has been systematically evaluated by microhardness testing through Vickers indentation and the degree of tempering has been correlated to the HAZ-softening. From the joint performance analysis of similar and dissimilar steel grade combinations assessed through standardized testing methods, three important issues have been targeted: a) the joint strength (maximum load to failure), b) the location of failure (failure mode), and c) the physical characteristic of the weld that determines certain type of failure (weld nugget size). In addition, a partial tensile test has been conducted in order to evaluate the initiation of failure in dissimilar steel grade combinations. It has been shown that HAZ-softening lowered the weld size at which transition from interfacial to pullout failure mode takes place along with increased load-bearing capacity and higher energy absorption. Thus, it is concluded from mechanical testing that HAZ-softening benefits the lap-shear tensile joint performance of resistance spot welded DP steels by facilitating pullout failures through failure initiation at the SC-HAZ (tempered region). Instrumented nanoindentation testing was employed to further investigate HAZ-softening along the SC-HAZ by evaluating individual phases of ferrite matrix and tempered martensite islands. Although the ferrite matrix presented a slight reduction in hardness at nanoscale, higher reduction in hardness (softening) resulted for tempered martensite; thus confirming that tempered martensite is the major contributor to softening at micro-scale. A comparison between nanohardness and microhardness testing made at different distances from the line of lower critical temperature of transformation (Ac1) allowed revealing the actual extension of the SC-HAZ. In this regard, good correlation was obtained between nanohardness results along the SC-HAZ and the microstructural changes analyzed by electron microscopy (i.e., the tempering of martensite occurring at various distances far from Ac1 was correlated to low temperature tempering of dual phase steels). An in-depth analysis of the tempering of martensite phase at high temperature in DP steel subjected non-isothermal conditions i.e., rapid heating, extremely short time at peak temperature and rapid cooling (resistance spot welding), has been carried out mainly through analytical transmission electron microscopy (TEM). In addition, an isothermal tempering condition (i.e., slow heating and long time at peak temperature) in DP steel has been evaluated for complementing the analysis. Both non-isothermal and isothermal conditions have been correlated to the softening behaviour. TEM analysis of the base metal in the DP steel indicated that the morphology of the martensite phase is dependent on its carbon content, and its tempering characteristics are similar to that of equal carbon containing martensitic steel. The isothermally tempered structure is characterized by coarsening and spheroidization of cementite (θ) and complete recovery of the martensite laths; whereas precipitation of fine quasi-spherical intralath θ-carbides, coarser plate-like interlath θ-carbides, decomposition of retained austenite into elongated θ-carbides, and partial recovery of the lath structure were observed after non-isothermal tempering of DP steel. This difference in tempering behaviour is attributed to synergistic effect of delay in cementite precipitation due to higher heating rate, and insufficient time for diffusion of carbon that delays the third stage of tempering process (cementite coarsening and recrystalization) during non-isothermal. The finer size and the plate-like morphology of the precipitated carbides along with the partial recovery of the lath structure observed after non-isothermal tempering strongly influenced the softening behaviour of DP steel. The chemical analysis of θ-carbides through extraction replicas for three different DP steels revealed that the chemistry of the carbides is inherited from the parent DP steel during non-isothermal tempering at high temperature confirming that non-isothermal tempering DP steel is predominantly controlled by carbon diffusion.