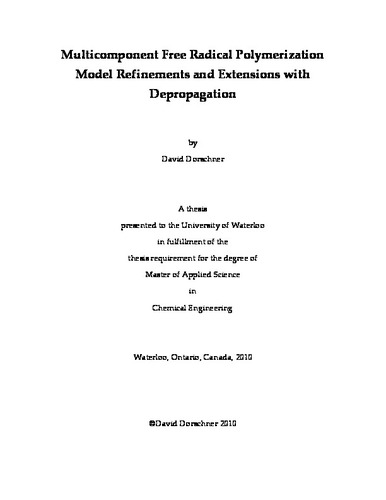 This thesis is directed towards expanding and refining a free radical multi-component polymerization model. The model considers up to six monomers (unique in the literature), both in bulk and solution polymerization, for either batch or semi-batch reactor modes. As the simulator database contains 13 monomers, 5 initiators, 4 solvents, 3 chain transfer agents and 2 inhibitors, all tested over a wide range of polymerization conditions, from data in both academic and industrial laboratories, several hundred combinations of ingredients can be modeled. The many outputs generated by the model include conversion, molecular weight, polymer composition, branching indicators, sequence length, as well as many others polymerization characteristics related to both production rate and polymer quality. Although the only literature data found to-date contains a maximum of four monomers, model predictions for homo-, co-, ter- and tetra-polymerizations show reasonable agreement against the data at both regular and elevated temperatures. Recently, with the basic polymerization kinetics modeled sufficiently, several expansions to the simulation software have been added. Specifically, depropagation, multiple initiators, back-biting, and composition control have been incorporated and/or improved, each adding to the advancement of the polymerization simulation tool. Depropagation is a vital mechanism that should be accounted for at elevated temperatures. Currently the software has the functionality to implement depropagation but requires further literature resources for improving the kinetic predictions for conversion and polymer composition. Consequently, depropagation research is ongoing. Back-biting and beta-scission of butyl acrylate (BA) is a recent development in free radical polymerization. The completed extension can model BA under the same diverse conditions as the base model, in homo-, co- and ter-polymerizations with depropagation, if applicable. The ability to generate a polymer with a constant (or controlled) composition throughout the reaction has several practical uses. Originally, three composition control scenarios were considered. At present, several methods as well as combinations of methods have been integrated into the model. With these new expansions and the ability to simulate several initiators at the same time, this model is directed towards becoming a complete free radical polymerization tool for training and educational uses both in industry and academia.