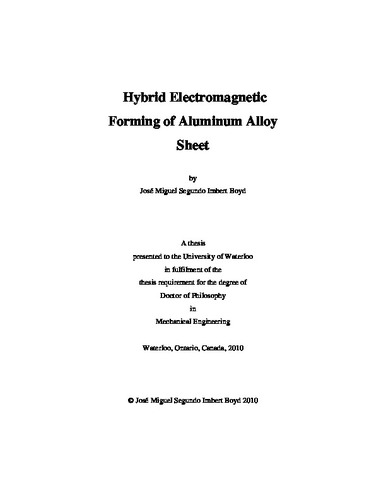 Electromagnetic (EM) forming is a high-speed forming process that uses the forces induced on a conductive workpiece by a transient high frequency current to form the workpiece into a desired shape. This thesis presents the results of an experimental and numerical study carried out to determine whether an EM forming process could be used to sharpen the radius of part pre-formed using a stamping process. Two processes were studied; a single step EM forming operation and a “hybrid forming” operation consisting of a conventional pre-forming step and an EM corner fill, both considering aluminum alloy AA 5754. The single step EM process proved unable to form acceptable samples due to excessive sample distortion, but was used to gain insight into the EM forming process. The hybrid operation consisted of pre-forming 1 mm AA 5754 sheet into a v-shape with a 20 mm outer radius using a conventional stamping operation and then reducing or “sharpening” the radius to 5 mm using EM forming. Sharpening the radius to 5 mm using conventional stamping was not achievable. The hybrid operation proved successful in forming the 5 mm radius, thus demonstrating that the material could be formed beyond its conventional formability limit using the hybrid operation. Numerical models were used to gain insight into the processes and the challenges involved in their numerical simulation. The numerical simulations showed that EM corner fill operation produces very high strain rates (10,000- 100,000 s-1) and complex three dimensional stress and strain states. The effect of the high strain rates could not be properly assessed, since no constitutive data was available for such high strain rates. The predicted stress states show that the process was not plane stress and that large through-thickness compressive stresses are produced that are favorable to damage suppression and through-thickness shear strains that increase ductility. The high strain rates and the complex stress and strain states are considered the likely causes for the observed increase in formability. The models provided valuable insight, but did not predict the final shape exactly and the possible reasons behind this are analyzed. The research indicates that features that are not achievable using traditional stamping techniques can be obtained with the hybrid EM forming process.