Mindful Physical Activity: A Pilot Study In The Context Of Walking To Public Transit 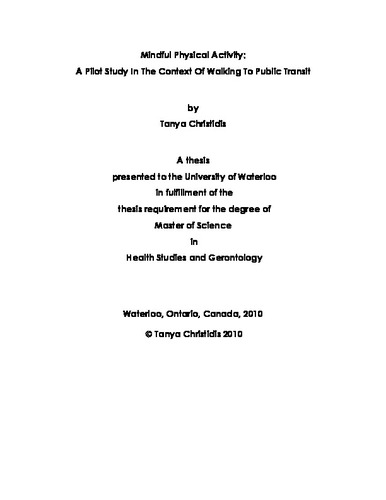 Objective: To describe the effect of mindfulness on perceived health, perceptions of transit walking and transit walking behaviours by using qualitative and quantitative methods in hopes of assessing the feasibility of future mindfulness interventions in transit users. Method: Fifty-three residents of Kitchener-Waterloo were recruited at transit stops and public buildings. All participants took part in a cross-sectional mixed-methods telephone survey, including qualitative questions designed by the researcher, quantitative questions from validated surveys and the Mindful Attention Awareness Scale. Both a qualitative measure and a quantitative measure of transit mindfulness were used. Four participants who scored low on transit mindfulness but walked more than 30 minutes per day took part in a qualitative interview. Results: Walking to transit was perceived to be a good way to get exercise, but participants thought that the value of this exercise depends on the distance walked. Although the majority of study participants were mindful of the value of walking to transit they did not attain enough exercise doing so. Most observed associations between mindfulness, perceptions of transit walking, transit walking behaviours and perceived health were positive but did not reach significance, likely due to issues of statistical power and small sample size. Of the tested covariates age and gender appeared to influence the observed positive associations. Conclusions: There is potential for successful mindfulness interventions with transit users who are older or female, especially when increased levels of transit walking are encouraged. Younger males could be targeted in future interventions, targeting their lack of mindfulness and adequate transit walking. Future research on mindfulness should focus on creating measures that can be used to measure mindfulness in daily life and also retain the Buddhist definition of mindfulness in-the-moment. Reliance on self-report measures should be avoided. The results of this study could be useful at the local level to design research that examines perceptions of transit and transit-related exercise as light rail is implemented to replace bus transit.