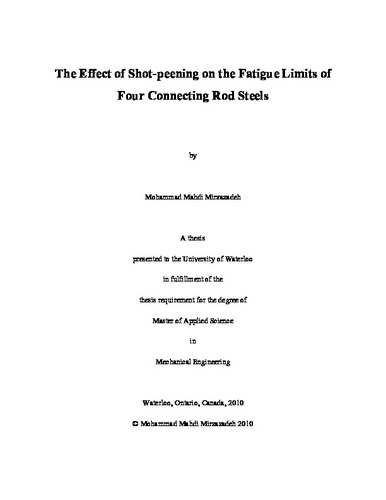 This work was carried out to study the effect of shot-peening on the fatigue behaviour of carbon steels. Differently heat treated medium and high carbon steel specimens were selected. Medium carbon steels, AISI 1141 and AISI 1151, were respectively air cooled and quenched-tempered. A high carbon steel, C70S6 (AISI 1070), was air cooled. The other material was a powder metal (0.5% C) steel. Each group of steels was divided into two. One was shot-peened. The other half remained in their original conditions. All were fatigue tested under fully reversed (R=-1) tension-compression loading conditions. Microhardness tests were carried out on both the grip and gage sections of selected non shot-peened and shot-peened specimens to determine the hardness profile and effect of cycling. Shot-peening was found to be deeper on one side of each specimen. Compressive residual stress profiles and surface roughness measurements were provided. Shot-peening increased the surface roughness from 0.26±0.03µm to 3.60±0.44µm. Compressive residual stresses induced by shot-peening reached a maximum of -463.9MPa at a depth of 0.1mm.The fatigue limit (N≈106 cycles) and microhardness profiles of the non shot-peened and shot-peened specimens were compared to determine the material behaviour changes after shot-peening and cycling. Also their fatigue properties were related to the manufacturing process including heat and surface treatments. Comparing the grip and gage microhardness profiles of each steel showed that neither cyclic softening nor hardening occurred in the non shot-peened condition. Cyclic softening was apparent in the shot-peened regions of all steels except powder metal (PM) steel. The amount of softening in the shot-peened region was 55.0% on the left side and 73.0% on the right in the AISI 1141 steel , 46.0% on the left side and 55.0% on the right in the C70S6AC steel and 31.0% on the right side in AISI 1151QT steel. Softening was accompanied by a decrease in the depth of surface hardness. It is suggested that although the beneficial effects of shot peening, compressive residual stresses and work hardening, were offset by surface roughness, crack initiation was more likely to occur below the surface. Surface roughness was not a significant factor in controlling the fatigue lives of AISI 1141AC and C70S6 steels, since they were essentially the same for the non shot-peened and shot-peened conditions. Shot-peening had very little effect on the push-pull fatigue limit of C70S6 steel (-2.1%), and its effect on AISI 1141AC steel was relatively small (6.0%). However, the influence of shot-peening on the AISI 1151QT and PM steels was more apparent. The fatigue limit of the PM steel increased 14.0% whereas the fatigue limit of the AISI 1151QT steel decreased 11.0% on shot peening.