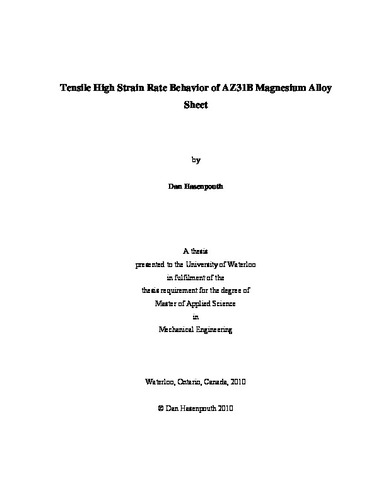 In an effort to improve the fuel efficiency of automobiles, car designers are investigating new materials to reduce the overall vehicle weight. Magnesium alloys are good candidates to achieve that weight reduction due in part to their low density and high specific strength. To support their introduction into vehicle body structures, the dynamic behavior of magnesium alloys must be determined to assess their performance during a crash event. In this work, the tensile high strain rate behavior of AZ31B magnesium alloy sheets was characterized. Two different temper conditions were considered: AZ31B-O (fully annealed) and AZ31B-H24 (partially hardened). Three different sheet thicknesses were considered for the O temper condition, 1.0, 1.6 and 2.5 mm, while the H24 temper was 1.6 mm in thickness. The sheet condition of the magnesium alloys implies an in-plane anisotropy induced by the rolling process. Therefore, both the rolling and transverse directions were investigated in the current research. In order to characterize the constitutive behaviour of AZ31B-O and AZ31B-H24 magnesium alloy sheets, tensile tests were performed over a large range of strain rates. Quasi-static experiments were performed at nominal strain rates of 0.003s-1, 0.1s-1 and 1s-1 using a servohydraulic tensile machine. Intermediate strain rate experiments were performed at 30s-1 and 100s-1 using an instrumented falling weight impact (IFWI) apparatus, and high strain rate experimental data at 500s-1, 1000s-1 and 1500s-1 was collected using a tensile split Hopkinson bar (TSHB) apparatus. Elevated temperature experiments (up to 300°C) were also performed at high strain rates using a radiative furnace mounted on the TSHB apparatus. The tensile experiments show a significant strain rate sensitivity of the constitutive behavior of both the O and H24 temper conditions. The two tempers exhibit an average increase of stress level of 60-65 MPa over the range of strain rates considered. As the strain rate increases, the strain rate sensitivity of both tempers also increases. The strain rate has a different effect on the ductility of the two material conditions. The ductility of AZ31B-O is significantly improved under high strain rate deformations, whereas the AZ31B-H24 exhibits similar ductility at low and high strain rates. Both material conditions presented a strong in-plane anisotropy, with an average stress level in the transverse direction higher than in the rolling direction by 15 MPa and 35 MPa for the O and H24 tempers, respectively. The thermal sensitivity for both tempers at high strain rates was obtained. The two material conditions exhibit a clear thermal softening. From room temperature to 250°C, the loss in strength at 5% plastic strain was found to be 55 MPa and 125 MPa for the AZ31B-O and AZ31B-H24 materials, respectively. The thickness of the AZ31B-O sheets has a mild effect on the measured constitutive behavior. The flow stress increases with increasing thickness. An average difference of 10-15 MPa was seen between the flow stress of the 1.0mm and 2.5mm sheets. However, similar strain rate sensitivity was seen for the three thicknesses. The experimental data was fit to three constitutive models: the Johnson-Cook model, its modified version with a Cowper-Symonds strain rate sensitivity formulation, and the Zerilli-Armstrong model. The three models were evaluated by numerical simulation of the TSHB experiment under various testing conditions. It was found that the Zerilli-Armstrong model was the most accurate in predicting the flow stress of the different material conditions. However, finite element models incorporating the three constitutive fits failed to predict necking in the specimen.