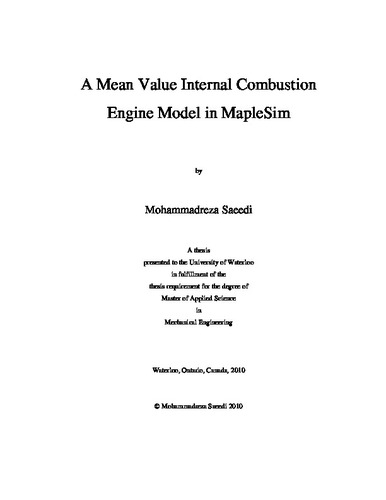 The mean value engine model (MVEM) is a mathematical model derived from basic physical principles such as conservation of mass and energy equations. Although the MVEM is based on some simplified assumptions and time averaged combustion engine parameters, it models the engine with a reasonable approximation and gives a satisfactory amount of information about the physics of the fluid energy passing through an engine system. MVEM can predict an engine’s main external variables such as crankshaft speed and manifold pressure, and important internal variables, such as volumetric and thermal efficiencies. Usually, the differential equations used in MVEM will predict fuel film flow, manifold pressure, and crankshaft speed. Because of its simplicity and short simulation time, the MVEM is widely used for engine control development. A mean value engine based on mathematical and parametric equations has recently been developed in the new MapleSim software. The model consists of three main components: the throttle body, the manifold, and the engine. The new MVEM uses combinations of causal and acausal components along with lookup tables and parametric equations. Adjusting the parameters allows the model to be used for new engines of interest. The model is forward-looking and so benefits from both Maple’s powerful mathematical tool and Modelica’s modern equation-based language. A set of throttle angle and mass flow data is used to find the throttle angle function, and to validate the throttle mass flow rates obtained from the model and the experiment.