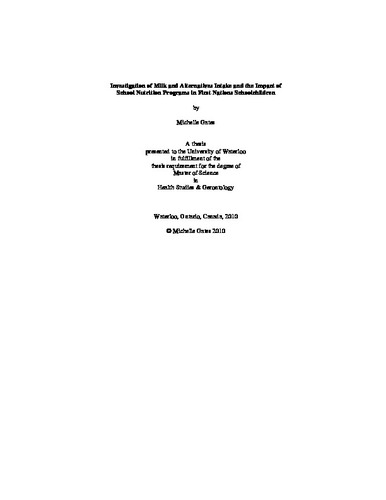 Objectives: To assess the intake of milk and alternatives, calcium, and vitamin D in on-reserve First Nations youth in Ontario, Canada; and the relationship of these nutrients to body mass index. To assess the impact of a simple food provision program on the intakes of milk and alternatives among First Nations youth in Kashechewan First Nation and Attawapiskat First Nation, Ontario, Canada. To assess the process of implementing a comprehensive school nutrition education program, as well as its effects on the intake of milk and alternatives, as well as knowledge, intentions, and self-efficacy among First Nations youth in Fort Albany First Nation, Ontario. Methods: Twenty-four hour diet recall data collected by web-based survey between November 2003 and June 2010 (including pre- and post-program) were used to assess intakes. Milk and alternatives, calcium, and vitamin D intakes were described and compared to food and nutrition standards and to intakes in the general population (CCHS cycle 2.2), and related to BMI. Data collected in different years for the same community and season were used to assess yearly effects on milk and alternatives intake (four communities). Data collected in the same year and season but from different communities were used to assess latitudinal effects on milk and alternatives intake (four community pairs). Paired change in intakes was evaluated one week-post snack program implementation in Kashechewan and Attawapiskat, as well as one year post-program in Kashechewan. Change in intakes as well as knowledge, self-efficacy, and intentions were evaluated in Fort Albany after the completion of a comprehensive school-based program. Student (grades 6-8), teacher (from grades K-8), and parent impressions were collected via questionnaires and focus groups. Results: Mean intakes of milk and alternatives, calcium, and vitamin D were below recommendations and levels seen in the general population. No relationship between body mass index and milk and alternatives, calcium, or vitamin D intake was detected. Latitudinal and yearly variation in intakes was detected in the communities under study. Pilot school food provision programs improved intakes in the short-term under close to ideal circumstances, including adequate dedicated personnel and resource support. After one week, calcium intake increased in Kashechewan (p=0.044), while milk and alternatives (p=0.034) and vitamin D (p=0.022) intakes increased in Attawapiskat. Multiple logistical barriers meant that these improvements were not sustained in the long-term. A comprehensive program in Fort Albany was successful in increasing knowledge (p=0.050) and intentions (p=0.010) towards milk and alternatives intake. Students were generally grateful for the snack programs, and especially enjoyed the hands-on lessons in Fort Albany. Teachers in Kashechewan thought that the snack program was very valuable for students and helped with their alertness and attentiveness. In Fort Albany, teachers noted that it was helpful to have an outside person who could devote all of their time to teaching the students about nutrition; they thought that the students gained a whole new perspective about nutrition via the program. Parents in Fort Albany were enthusiastic about the school nutrition program, but noted availability and cost as major barriers to healthy eating. Conclusions: The low milk and alternatives, calcium, and vitamin D intakes seen in the study population parallel results seen in studies of other Canadian Aboriginal populations. Further study is needed to clarify the relationship between milk & alternatives intake and BMI in this population. Latitudinal and yearly variations in intake were identified, and therefore should be accounted for when tailoring interventions to specific First Nations; the needs, opportunities, and barriers in each case may differ significantly. This study demonstrated that school food provision programs were valued by students, parents, and teachers; and were efficacious in improving short-term intakes. Comprehensive programs were shown to improve student knowledge and intentions to make healthy food choices. In order to support long-term effectiveness, the barriers identified through this research, including the need for adequate and sustainable resources, must be addressed.