Primary Blast Injury of the Head: Numerical Prediction and Evaluation of Protection 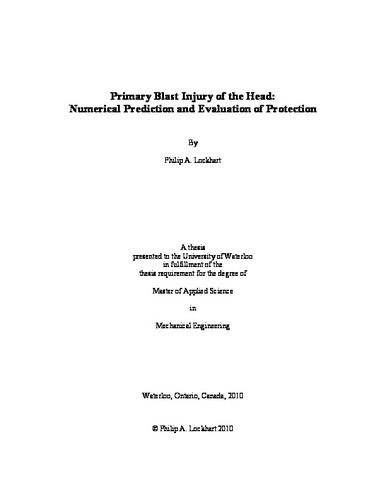 The prevalence of injuries sustained from blast have been increasing over the past few decades due to the increasing use of Improvised Explosive Devices in areas where peacekeepers are deployed, as well as terrorist bombing incidents. The scope of this project was to evaluate the potential for head injury from primary effects in blast environments and to investigate protective aspects of protective equipment and new potential protective designs to mitigate or reduce the likelihood of Traumatic Brain Injury (TBI). In order to meet these goals, methods of blast loading as well as the kinematic response of the head when subjected to blast loading were investigated numerically and validated against experimental data. This was done for both low and mid heights of burst at varying standoff distances. The methods of loading considered were the basic spherical air burst formulation of the CONventional WEaPons algorithm (CONWEP), an advanced version of the algorithm that included ground reflection and mach stem formation, and a hemispherical surface burst which included ground reflection. The method that produced the most consistent results compared to the experiments was the enhanced version of CONWEP for mid level heights of burst; however, for low heights of burst, a novel “mirrored charge” setup provided the most accurate predictions. The kinematic response of the GEBOD numerical human body model, a rigid body representation of a 50th percentile male, was validated against experimental tests conducted by Defense Research and Development Canada (DRDC) for a range of standoff distances and Heights of Burst. It was found the response of the GEBOD was in good agreement with the DRDC experiments for peak acceleration, impulse and the Head Injury Criterion. The kinematic response of the head was investigated for various charge locations to study the effects of height of burst, lateral distance and standoff distance to the charge using the GEBOD numerical human body model. It was found that the standoff and height of burst had the largest influence on the acceleration experienced by the head. The height of burst study showed a large jump in the HIC15 injury criterion and head acceleration values when the charge was detonated within the region where a mach stem would form. As would be expected for the standoff distance from the charge, the closer the charge was to the body, the higher the accelerations experienced. A quasi two dimensional model of the human head at the mid-sagittal plane was developed in order to evaluate response at the tissue level, and the effect of protection. The sagittal head model was used to examine wave interactions in the fluid flow around the head during a blast event. This was achieved by utilizing an Arbitrary Langrangian-Eulerian formulation to model the blast loading. This model was also validated against experimental data such that it demonstrated the same kinematic response as the experimental tests under identical blast loading conditions. A helmet model was coupled to the sagittal head model using a layer of foam, and a statistical study was performed to determine the main effects and any interaction effects for the parameters of the numerical foam model. By analyzing these parameters and combining the best values for the effects, an optimum foam model was determined. This foam model was compared to actual foam materials and aluminum foam was found to have the closest properties to the idealized model. The aluminum foam material model was placed into the existing sagittal model and was found to have decreased the acceleration seen by the head under all the different loading cases considered. The maximum principal strain in the brain and the maximum intracranial pressure were also examined and compared to proposed injury criterion. For implementation in a helmet, an additional layer of comfort foam or some other soft material would have to be added between the head and the aluminum foam to prevent it from cutting or injuring the person. Some of the polymeric foams investigated could be used instead of aluminum foam; however, more data is required to properly define the material response at high strain rate loading. This study has shown that blast loading to the head can result in significant accelerations which could result in injury. By using common materials in the existing form of head protection, this potential for injury can be reduced.