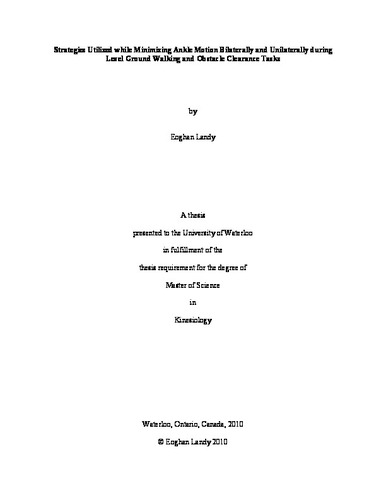 A great deal of research has been done on the adaptive strategies of individuals who have been affected by a gait altering ailment, but there is little research on the adaptive strategies to imposed restrictions in the healthy population. The role of the ankle in healthy gait is to generate a “push-off” force to create forward propulsion of the body (Winter, 2004). The purpose of this thesis was to identify adaptation patterns and compensation strategies in individuals while wearing and not wearing a device to reduce ankle motion(Ankle Motion Minimizer – AMM). Motion capture and force plate data were collected to determine the lower body kinematics and joint powers during both level ground walking and obstacle avoidance tasks. Repeated Measure ANOVAs with an alpha level of 0.05 determined that differences in the ankle angles and the ankle, knee, and hip powers existed between the various conditions. Results showed that participants had a decreased range of motion and power production at the ankle joint while wearing the AMM. Meanwhile, an increase in the power bursts from the ipsilateral knee were observed during the AMM conditions as well as small increases at the contralateral ankle and ipsilateral hip during the unilateral AMM condition. EMG analysis showed a distinct muscle activation pattern for each individual muscle during the different conditions. From this investigation, individuals who are unable to produce power through the ankle joint, were able to increase power propulsion predominately at the knee to compensate for the lack of propulsion provided by the ankle, therefore allowing ambulation to continue.