Corrosion of Alternative Grades of Reinforcing Steel in Concrete 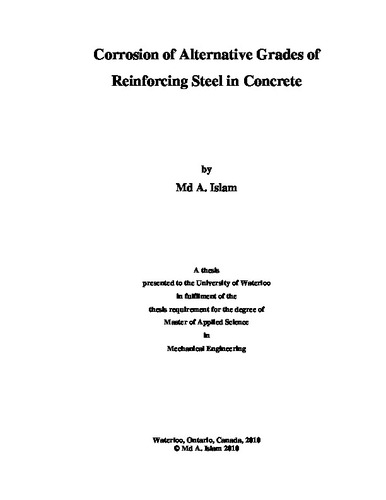 Reinforcing steel in concrete has been used for many years in roads, bridges and other structures to give strength and durability; concrete has only good compressive strength and reinforcing steel gives the tensile strength to the concrete to sustain both the compressive and tensile load, making concrete structures to be used in the common as well as critical areas. Reinforcing steel that was used in structures predominantly is mild steel, which is considerably cheaper than stainless steel, and more susceptible to corrosion leading to the damage of the structures and less longevity. To solve the problem with the use of mild steel in critical areas, such as bridges; stainless steel is used; which has iron as the main constituents along with the chromium as the major alloying element and various grades are manufactured varying the compositions of steel. To reduce the cost of the stainless steel, some compositions like chromium, molybdenum, nickel are varied; especially the nickel is being replaced by manganese, the cost of which is significantly less than that of nickel. The alternative grades of the reinforcing steel that were used for testing the corrosion resistance are mild steel (400), weldable mild steel (400 W) and four stainless steel 316LN, UNS 24100 (Enduramet 32), 2304, LDX 2101; among them 316LN and UNS 24100 are the austenitic steels (Valbruna) and 2304 and LDX 2101 are duplex steels (Outokumpu). The austenitic steels have no ferritic phase which is making austenitic steel more corrosion resistance than the duplex steels which have almost equal parts of the ferritic and austenitic phases. Concrete that is used commonly as the shield for the reinforcing steel providing the environment to passivate the reinforcement. Concrete has the pH of ~13.5 which is the equivalent to the pH of the pore solution. Its strength and curing time varies due to the water cement ratio and composition and also the environment in which it is placed. Good quality concrete has less permeability and fewer cracks thereby limiting the ingress of the de-icing slats to the reinforcing steel and delaying the onset of corrosion. Corrosion of the reinforcing steels was tested in concrete using both an accelerated exposure test and ASTM A 955M standard for cracked prisms to measure the corrosion rate and open circuit potential, which are quantitative measurement for corrosion. It is hoped that the results will provide a guide for the future use of the alternative grades of the reinforcing steel to be used in the concrete. Reinforcing mild steels were compared to determine if there is any advantage in using the more carefully controlled 400W welding grade, rather than the 400 grade. The service life of structures with the 400 grade of steel is well established and so the data from the 400 grade also provided a relative measure of corrosion resistance for the alternative grades of the stainless steel. Microcell corrosion of the reinforcing steel was monitored by the use of the linear polarization and the corrosion potential. The data for show that there is no significant corrosion on any of the stainless steels after 15 months of measurement, whereas both the mild steels embedded in the concrete corroded fully as confirmed by visual observation of the beams after autopsying The autopsied samples were then analysed for chloride content in the concrete adjacent to the reinforcing bars. This was accomplished by titration. The chloride content on the beams with 400 and 400W grades was found to be higher than the beams with the stainless steels, where the percentage of chloride remained almost the same. Macrocell corrosion tests were performed on the ASTM A 955M cracked prisms and showed changes in corrosion current density in agreement with the accelerated corrosion current density of the stainless steels. The only difference was observed in the corrosion potentials of the 400 and 400W steels, which were more negative in the cracked prisms than in the beams. In summary, all the stainless steels showed evident corrosion resistance both in accelerated and ASTM A 955M prisms tests and no sign of corrosion was found in the stainless steels after 400 days in beams and 200 days in prisms. The regular and weldable steels corroded in both tests in agreement with the data present in research.