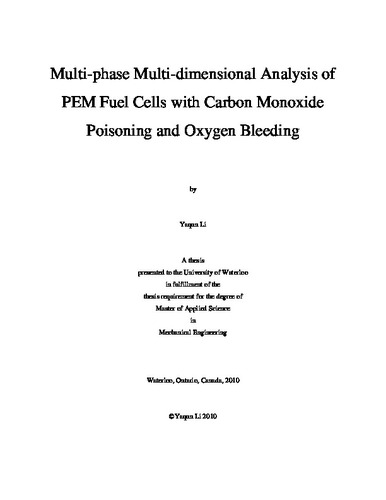 Polymer electrolyte membrane (PEM) fuel cells are promising alternative green power source for mobile, portable and stationary applications. However, their cost, durability, and performance are impacted by their sensitivity to impurities in fuel stream. Carbon monoxide (CO), an impurity commonly present in the hydrogen gas produced from hydrocarbon fuels, is known to have a significant degrading effect on PEM fuel cell performance because CO has a strong affinity to the platinum-based catalyst. At present, most studies in literature are limited to either experimental or simplified-dimensional analysis/modeling. In this thesis research, a three-dimensional (3D) multiphase PEM fuel cell model with the CO poisoning and O2 bleeding is developed based on the conservation laws for mass, momentum, energy, and species, and implemented in the commercial software Fluent (6.3.26) through the user-defined functions. Numerical simulations are conducted to simulate a single PEM fuel cell including flow channels, gas diffusion layers, catalyst layers, and PEM. The simulation results are compared with experimental data favorably. The result shows that the reaction rate of hydrogen in the anode catalyst layer is higher near the membrane layer, decreasing towards the gas diffusion layer (GDL) interface, and the reaction rate in general is higher in the inlet region and decreases towards the exit region of the flow channel. It means that the outlet of anode catalyst layer next to the flow channel and GDL has suffered the most significant poisoning effect. The result helps optimize the design of anode catalyst layer by embedding more platinum on the most poisoned area to increase available surface for hydrogen adsorption; similarly, reducing platinum loading on the less poisoned area. The fuel cell performance can be almost fully recovered when switching the anode fuel mixture to pure hydrogen, though it takes a long period of time. The reaction rate of hydrogen decreases significantly along the flow channel when impurity mixture is provided; while there is little change along the channel for pure hydrogen fuel. Adding oxygen into the anode fuel mixture can mitigate CO poisoning, but there is a time delay when the oxygen is introduced into the anode stream and when the performance starts to recover. It is observed that at the beginning of oxygen introduced in the anode stream the recovery rate in the region adjacent to the channel outlet is faster than the rate in the region close to the inlet. This difference in the recovery rate gradually becomes smaller over time. In addition, the influence of CO poisoning and oxygen bleeding on multi-phase water is investigated. The influence on dissolved water is only clearly seen in the anode catalyst layer next to the land area. Finally, response to sudden load changes is simulated by changing cell voltage. It is found that the overshoot and undershoot are more significant at high current densities.