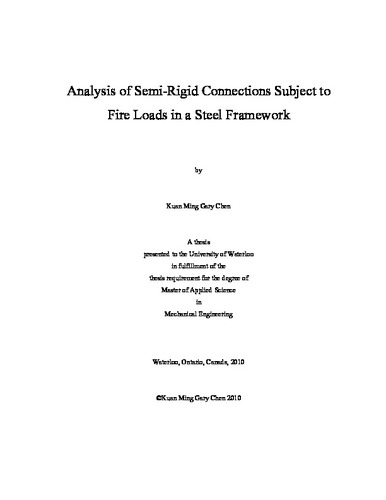 The purpose of this study is to develop an approach that considers fire as a load in the design of structures. Recent studies of the full-scale fire tests in Cardington, UK and the World Trade Centre collapse have shown that the behaviour of steel structures in fire when assembled into a frame differs from that measured or predicted by fire testing of individual structural elements, revealing the importance of accounting for realistic fire loads in the design of structures and the potential inadequacy of fire testing individual elements as employed by current building codes. Yet, there has been limited basic research and development to allow consideration of fire as a load in the analysis and design of structures. In response to this much needed work, this thesis develops an approach to include fire as a load in the analysis of a 2-bay by 2-storey structure when a semi-rigid connection is exposed to thermal loads typical of those that might be encountered during a real fire. The structural fire analysis is principally based on incorporating moment-rotation-temperature data for the connection, as found in archival literature, into a structural analysis software package developed at the University of Waterloo. The software employs a modified Displacement Method for analyzing structures, which involves the computation of stiffness reduction factors that represent the deterioration of strength of the structural elements as they are subjected to various loads. By modifying the moment-rotation-temperature data for a semi-rigid connection into a form recognized by the software, a fire load is simulated by incrementally elevating the temperature of the affected steel connection. In this way, a fragility analysis of the entire structure under fire load is conducted. A series of example calculations are presented for cases in which the semi-rigid connection is exposed to increasing temperatures of 20°C, 200°C, 400°C and 600°C. The analysis showed that as the connection is heated, it is weakened, and the steel structure undergoes a redistribution of moments from the heated connection to other non-heated elements within the framework, which is essentially a form of fire-resistance of the assembled structure that unassembled members in isolation do not have. The study also demonstrated that the experimental moment-rotation-temperature data reported in archival literature can be incorporated into the structural analysis, and that additional force-deformation data obtained from further experimental work or through finite-element analyses would allow the study to be extended to analyze the effects of fire loading on other structural elements of an assembled framework. To demonstrate the link between the predicted structural response at different temperatures and the development of a compartment fire, a fire modelling analysis is also performed.