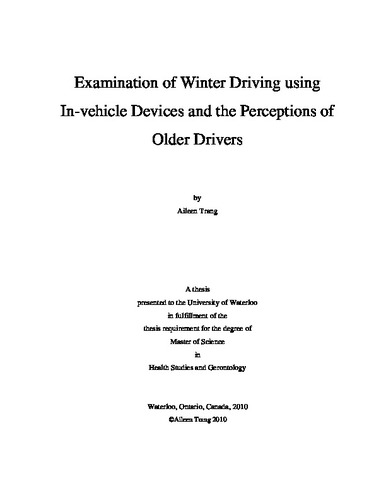 Introduction: Although several studies have examined self-regulatory practices in older drivers, most have relied on self-report. Blanchard (2008) was the first to examine actual driving patterns more objectively (using in-vehicle devices), and the associations between driver perceptions and self-regulatory practices. However, her sample of older drivers living in Southwestern Ontario was only monitored for one week between June and October. Winter conditions in northern climates appear to influence the driving patterns of older adults, however the only evidence to date is based on self-report (e.g., Sabback & Mann, 2005). Purposes: The aims of the thesis were to: 1) replicate Blanchard’s findings on the associations between driver perceptions and self-regulatory practices in older drivers; and 2) extend this investigation by examining driving over a longer monitoring period in the winter. Methods: A convenience sample of 47 drivers aged 65 to 91 (49% female) from Southwestern Ontario was monitored for two consecutive weeks between late November and March. Driving data was collected using two electronic devices (one with GPS), which were installed at the first of two home visits. Information on weather and road conditions was collected from archives and descriptions in participant trip logs. Participants completed questionnaires concerning background and usual driving habits. Driver perceptions were assessed using the Driving Comfort (DCS) and Perceived Driving Abilities (PDA) scales, while self-reported usual practices were examined using the Situational Driving Frequency (SDF) and Avoidance (SDA) scales. Functional driving-related abilities were assessed using the AAA/CAA’s Roadwise Review and interviews were conducted at the second home visit, at which point devices were removed and trip logs collected. Results: Driver perceptions (particularly night comfort) were significantly related to multiple indictors of driving (distance, duration, radius from home and night driving) in the expected directions. Men had higher comfort scores and better perceptions of their driving abilities and concurrently drove more often, greater distances and further from home. Participants drove on average five days a week over the winter monitoring period. Over half the 94-day monitoring period had inclement weather, while 67% of the period had poor road conditions. Nonetheless, all 46 participants drove at least once in bad weather and 73% did so in darkness. Distance driven at night varied by month of participation, with people driving more at night during December (average 50 km), compared to March (average of only 13 km). Those with lower daytime comfort scores (>50%) scores drove less on days with inclement weather (p=.03). The sample was also more likely to make social trips on clear days (p=.002) and out-of-town trips on days with good road conditions (p=.02). Conclusions: The study replicated Blanchard’s (2008) findings that driver perceptions are strongly associated with actual behaviour, regardless of the season. And both studies indicate that older drivers may not self-regulate as much as they say they do on avoidance questionnaires. Driving was fairly consistent over the two weeks, except for radius and night distance and the additional week of monitoring was more likely to capture night driving. Nonetheless, the present study provides only a snapshot of behaviour and findings should not be generalized beyond urban dwelling, well-educated, healthy and active older drivers from one part of Canada. Further studies, with larger more diverse samples (living in different regions) and longer monitoring periods, are required to advance our knowledge of self-regulatory practices in older drivers and related decision-making processes.