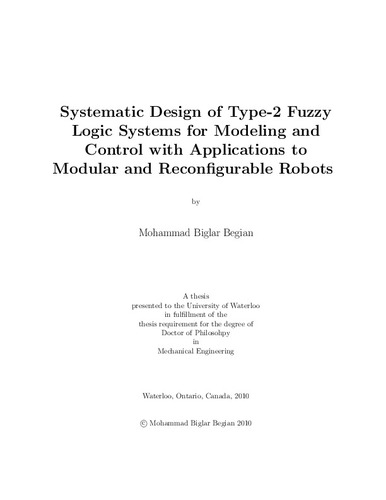 Fuzzy logic systems (FLSs) are well known in the literature for their ability to model linguistics and system uncertainties. Due to this ability, FLSs have been successfully used in modeling and control applications such as medicine, finance, communications, and operations research. Moreover, the ability of higher order fuzzy systems to handle system uncertainty has become an interesting topic of research in the field. In particular, type-2 FLSs (T2 FLSs), systems consisting of fuzzy sets with fuzzy grades of membership, a feature that type-1 (T1) does not offer, are most well-known for this capability. The structure of T2 FLSs allows for the incorporation of uncertainty in the input membership grades, a common situation in reasoning with physical systems. General T2 FLSs have a complex structure, thus making them difficult to adopt on a large scale. As a result, interval T2 FLSs (IT2 FLSs), a special class of T2 FLSs, have recently shown great potential in various applications with input-output (I/O) system uncertainties. Due to the sophisticated mathematical structure of IT2 FLSs, little to no systematic analysis has been reported in the literature to use such systems in control design. Moreover, to date, designers have distanced themselves from adopting such systems on a wide scale because of their design complexity. Furthermore, the very few existing control methods utilizing IT2 fuzzy logic control systems (IT2 FLCSs) do not guarantee the stability of their system. Therefore, this thesis presents a systematic method for designing stable IT2 Takagi-Sugeno-Kang (IT2 TSK) fuzzy systems when antecedents are T2 fuzzy sets and consequents are crisp numbers (A2-C0). Five new inference mechanisms are proposed that have closed-form I/O mappings, making them more feasible for FLCS stability analysis. The thesis focuses on control applications for when (a) both plant and controller use A2-C0 TSK models, and (b) the plant uses T1 Takagi-Sugeno (T1 TS) and the controller uses IT2 TS models. In both cases, sufficient stability conditions for the stability of the closed-loop system are derived. Furthermore, novel linear matrix inequality-based algorithms are developed for satisfying the stability conditions. Numerical analyses are included to validate the effectiveness of the new inference methods. Case studies reveal that a well-tuned IT2 TS FLCS using the proposed inference engine can potentially outperform its T1 TSK counterpart, a result of IT2 having greater structural flexibility than T1. Moreover, due to the simple nature of the proposed inference engine, it is easy to implement in real-time control systems. In addition, a novel design methodology is proposed for IT2 TSK FLC for modular and reconfigurable robot (MRR) manipulators with uncertain dynamic parameters. A mathematical framework for the design of IT2 TSK FLCs is developed for tracking purposes that can be effectively used in real-time applications. To verify the effectiveness of the proposed controller, experiments are performed on an MRR with two degrees of freedom which exhibits dynamic coupling behavior. Results show that the developed controller can outperform some well-known linear and nonlinear controllers for different configurations. Therefore, the proposed structure can be adopted for the position control of MRRs with unknown dynamic parameters in trajectory-tracking applications. Finally, a rigorous mathematical analysis of the robustness of FLSs (both T1 and IT2) is presented in the thesis and entails a formulation of the robustness of FLSs as a constraint multi-objective optimization problem. Consequently, a procedure is proposed for the design of robust IT2 FLSs. Several examples are presented to demonstrate the effectiveness of the proposed methodologies. It was concluded that both T1 and IT2 FLSs can be designed to achieve robust behavior in various applications. IT2 FLSs, having a more flexible structure than T1 FLSs, exhibited relatively small approximation errors in the several examples investigated. The rigorous methodologies presented in this thesis lay the mathematical foundations for analyzing the stability and facilitating the design of stabilizing IT2 FLCSs. In addition, the proposed control technique for tracking purposes of MRRs will provide control engineers with tools to control dynamic systems with uncertainty and changing parameters. Finally, the systematic approach developed for the analysis and design of robust T1 and IT2 FLSs is of great practical value in various modeling and control applications.