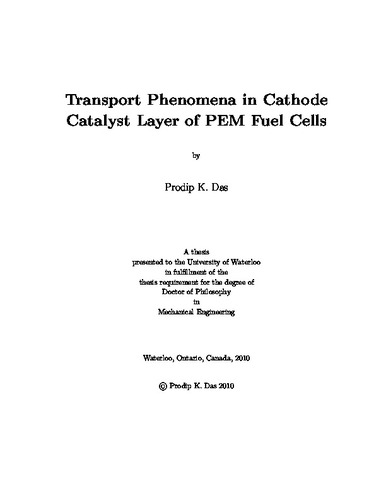 Polymer electrolyte membrane (PEM) fuel cells have increasingly become promising green energy sources for automobile and stationary cogeneration applications but its success in commercialization depends on performance optimization and manufacturing cost. The activation losses, expensive platinum catalyst, and water flooding phenomenon are the key factors currently hindering commercialization of PEM fuel cells. These factors are associated with the cathode catalyst layer (CCL), which is about ten micrometers thick. Given the small scale of this layer, it is extremely difficult to study transport phenomena inside the catalyst layer experimentally, either intrusively or non-intrusively. Therefore, mathematical and numerical models become the only means to provide insight on the physical phenomena occurring inside the CCL and to optimize the CCL designs before building a prototype for engineering application. In this thesis research, a comprehensive two-phase mathematical model for the CCL has been derived from the fundamental conservation equations using a volume-averaging method. The model also considers several water transport and physical processes that are involved in the CCL. The processes are: (a) electro-osmotic transport from the membrane to the CCL, (b) back-diffusion of water from the CCL to the membrane, (c) condensation and evaporation of water, and (d) removal of liquid water to the gas flow channel through the gas diffusion layer (GDL). A simple analytical model for the activation overpotential in the CCL has also been developed and an optimization study has been carried out using the analytical activation overpotential formulation. Further, the mathematical model has been simplified for the CCL and an analytical approach has been provided for the liquid water transport in the catalyst layer. The volume-averaged mathematical model of the CCL is finally implemented numerically along with an investigation how the physical structure of a catalyst layer affects fuel cell performance. Since the numerical model requires various effective transport properties, a set of mathematical expressions has been developed for estimating the effective transport properties in the CCL and GDL of a PEM fuel cell. The two-dimensional (2D) numerical model has been compared with the analytical model to validate the numerical results. Subsequently, using this validated model, 2D numerical studies have been carried out to investigate the effect of various physical and wetting properties of CCL and GDL on the performance of a PEM fuel cell. It has been observed that the wetting properties of a CCL control the flooding behavior, and hydrophilic characteristics of the CCL play a significant role on the cell performance. To investigate the effect of concentration variation in the flow channel, a three-dimensional numerical simulation is also presented.