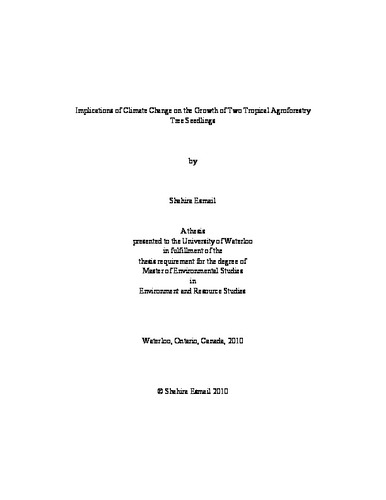 Tropical agroforestry systems are perceived to have the capacity to be resilient to future changes in climate. This study quantifies the response of two tropical agroforestry tree seedlings; Gliricidia sepium (Jacq.) Walp and Cedrela odorata L. to increases in atmospheric concentrations of carbon dioxide (CO2) (800 ppm), temperature (+2°C daytime and +3°C nighttime) and the combined conditions. As well, this study analyzes the microbial community structure and nutrient concentration in response to elevated concentrations of CO2 on tropical silvopastoral soil, conventional pastoral soil and a regenerated forest soil. Both tree species demonstrated very individual responses to the different climate scenerios. While no significant CO2 fertilizer effect was observed in either species the combined treatment demonstrated a significant increase in seedling height for both species. The response of G. sepium to the combined treatment was similar to its response to the temperature treatment which could be a result of achieving the optimal range in temperature for growth. As well, an increase in C:N ratio from G. sepium seedling leaves under the combined treatment indicates the possibility of the nutrient concentration diminishing thereby reducing the role of this species as a provider of high nutrient biomass. The soil microbial community showed very little change in response to elevated concentrations of CO2 and differences in community structure between sites were also negligible. Soil nutrient concentration maintained the best balance over the course of both twelve week incubations for the regenerated forest site followed by the silvopastoral site and lastly the conventional pasture site. The response of soil nutrient concentration to elevated concentrations of CO2 was negligible reflecting the response of the soil microbial community.