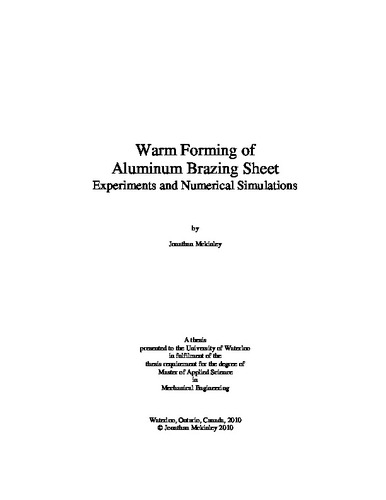 Warm forming of aluminum alloys of has shown promising results for increasing the formability of aluminum alloy sheet. Warm forming is a term that is generally used to describe a sheet metal forming process, where part or all of the blank is formed at an elevated temperature of less than one half of the material’s melting temperature. The focus of this work is to study the effects of warm forming on Novelis X926 clad aluminum brazing sheet. Warm forming of clad aluminum brazing sheet, which is commonly used in automotive heat exchangers has not been studied. This work can be split into three main goals: i) to characterize the material behavior and develop a constitutive model, ii) to experimentally determine the effects of warm forming on deep drawing; and, iii) to create and validate a finite element model for warm forming of Novelis X926. For an accurate warm forming material model to be created, a temperature and rate dependant hardening law as well as an anisotropic yield function are required. Uniaxial isothermal tensile tests were performed on 0.5mm thick Novelis X926at 25°C (room temperature), 100°C, 150°C, 200°C, and 250°C. At each temperature, tests were performed with various strain rates between 7.0 E -4 /sec and 7.0 E -2 /sec to determine the strain rate sensitivity. Tensile tests were also performed at 0° (longitudinal), 45° (diagonal), and 90° (transverse) with respect to the material rolling direction in order to assess the anisotropy of the material. It was found that increasing forming temperature increases elongation to failure by 200%, decreases flow stress by 35%, and increases strain rate sensitivity. Barlat’s Yield 2000 yield function (Barlat et al., 2003a) and the Bergström work hardening law (van den Boogaard and Huétink , 2006) were found to accurately method model the material behavior. Warm deep drawing of 101.6 mm (4”) diameter cylindrical cups was performed using specially designed tooling with heated dies and a cooled punch. Deep drawing was performed on 228.6 mm (9“) and 203.2 mm (8”) diameter blanks of 0.5 mm thick Novelis X926. Deep drawing was performed with die temperatures ranging from 25°C to 300°C with a cooled punch. Teflon sheet and Dasco Cast 1200 lubricants were used in experiments. Different punch velocities were also investigated. 228.6 mm diameter blanks, which could not be drawn successfully at room temperature, were drawn successfully using 200°C dies. Increasing the die temperature further to 250°C and 300°C provided additional improvement in formability and reduced tooling loads. Increasing the punch velocity, increases the punch load when forming at elevated temperatures, reflecting the strong material rate sensitivity at elevated temperatures. A coupled thermal mechanical finite element model was developed using the Bergström hardening rule and the Yield 2000 yield surface using LS-DYNA. The model was found to accurately predict punch force for warm deep drawing using Teflon sheet as a lubricant. Results for Dasco Cast 1200 were not as accurate, due to the difficulties in modeling the lubricant’s behavior. Finite element simulations demonstrated that warm forming can be used to reduce thinning at critical locations, compared to parts formed at room temperature.