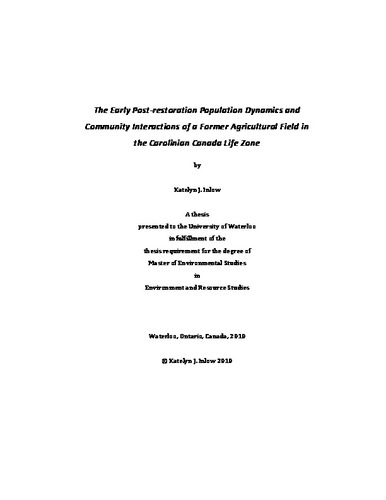 Monitoring ecological restoration at the community scale provides insight into how the population dynamics and community interactions are progressing through time in comparison to a restoration’s goals and reference conditions. This study monitored the early post-restoration dynamics of a sand plain located in the Carolinian Canada ecozone called Lake Erie Farms. The restoration consisted of restoring three habitats via sculptured seeding: a mesic forest, oak woodland, and sand barren. The hypothesis of this study is that the restoration efforts have established population dynamics and community interactions consistent with successional patterns expected from comparative literature. Community ecology, directed succession, and alternative stable states are the underlying theories that provided a conceptual and theoretical lens from which to study the objectives and hypothesis. To gain insight into the community dynamics at Lake Erie Farms the vegetation abundance, seed abundance and viability of the seedbank, seed viability of the 6 most dominant species (3 most dominant native species & 3 most dominant weedy species), and soil moisture & pH were monitored. The analysis was conducted using a RMANOVA of a nested design (P > 0.001, 0.01 and 0.05) to compare the variables in relation to the site (i.e. the sum of all the quadrats), the restoration treatment nested within the site, the field nested within the site, the transect nested within the restoration treatment and the quadrat nested within the restoration treatment. The significant findings of this study include: i) the restoration treatments are producing similar results as those expected from the literature, though there is evidence of the sculptured seeding treatment accelerating the successional stage at Lake Erie Farms compared to abandoned agricultural fields in similar ecosystems because of the presence of later-successional species; ii) the control areas are less diverse than each of the restoration units (P>0.05); and iii) the soil moisture among the treatments is beginning to diverge into the desired restoration units.