The Use of Traditional Environmental Knowledge to Assess the Impact of Climate Change on Subsistence Fishing in the James Bay Region, Ontario, Canada 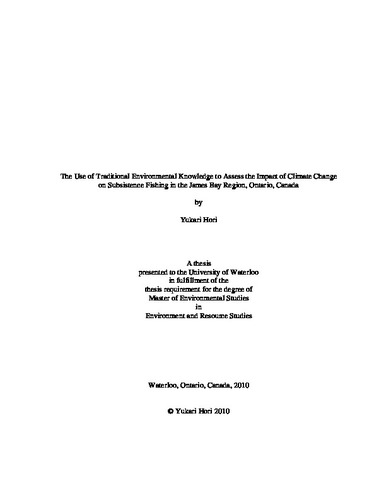 This thesis used traditional environmental knowledge (TEK) to assess the impacts of climate change on food security for First Nations communities located in the western James Bay region of northern Ontario. In addition, climate scenarios were derived from General Circulation Models (GCMs) and Regional Climate Models (RCMs). The TEK data revealed there were no observable climatic-related effects on fish species (i.e., distributional change) except the fish die-offs of July 2005. Climate data specific for the period of the fish die-offs in the Albany River (the western James Bay region) indicated not only a temporal relationship between a heat wave and the fish die-offs, but also a concurrent period of reduced precipitation. Climate scenarios showed increases in mean air temperature for all seasons, all time periods (2011– 2040, 2041– 2070, and 2071– 2100), and all emission scenarios (A2, A1B, and B1); however, the results for seasonal total precipitation were variable, dependent emission scenarios. TEK suggest that increasing temperatures may not be the only climate change phenomena of importance; climate variability and extreme events were reported as precipitating fish die-offs and changes in the timing of harvesting of fish. Further research should concentrate on the investigation of climate change and food security issues in sub-arctic regions.

Yukari Hori (2010). The Use of Traditional Environmental Knowledge to Assess the Impact of Climate Change on Subsistence Fishing in the James Bay Region, Ontario, Canada. UWSpace. http://hdl.handle.net/10012/5225