Keeping Up With the Joneses: Electricity Consumption, Publicity and Social Network Influence in Milton, Ontario 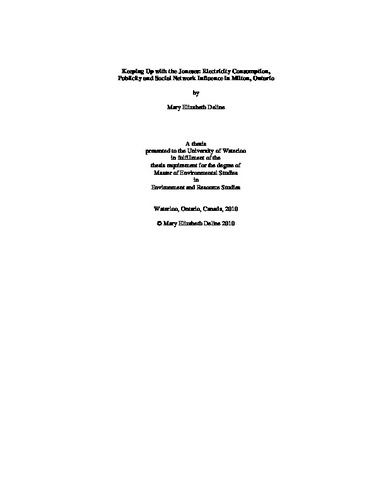 Abstract This study used an exploratory research focus to investigate if making electricity consumption public and subject to social norms and networks resulted in consumption decreases for households in Milton, Ontario. In the first phase, Milton Hydro identified customers who fell within an average annual electricity consumption category and these customers were invited to participate by mail. Due to lack of participant uptake, cold-calling, targeting of service and faith groups and commuters, and snowball sampling were employed to obtain a total participant size of 17. The second phase saw participants grouped according to social network type (occupational, faith group, etc) and exposed to approval or disapproval indicators within their group about their daily electricity consumption rates via an on-line ‘energy pool’. There were five main groups: one of neighbours, one of members of a faith group, one of members of a company, one of strangers and one of a control group. Group members saw other members’ indicators with the exception of the control group, whose indicators were privately delivered. All group’s electricity consumption was tracked through daily smart meter readings. Participants also had the option of commenting on each other’s electricity use via an online ‘comment box’. In the third phase participants were asked to participate in a questionnaire to assess: 1) the perceived efficacy of the intervention; 2) perceptions of electricity consumption; and 3) the influence of the group on these perceptions. This sequential methodology was chosen for its ability to “...explain significant (or non-significant) results, outlier results, or surprising results” (Cresswell, 2006, p. 72). The findings of this exploratory research seem to suggest the following: 1) that publicity or group type does not seem to affect electricity consumption in comparative electricity consumption feedback for this study; 2) that participants used injunctive norms to comment on their electricity consumption but directed these comments solely at themselves; and 3) that the stronger the relationships in the group, the more likely participants were to engage with the website through checking it and commenting on it. This study may be useful to those in the fields of: 1) electricity conservation who wish to leverage feedback technologies; 2) social networks who wish to better understand how tie strength interacts with social norms and; 3) those in social marketing who wish to develop norm-based campaigns.