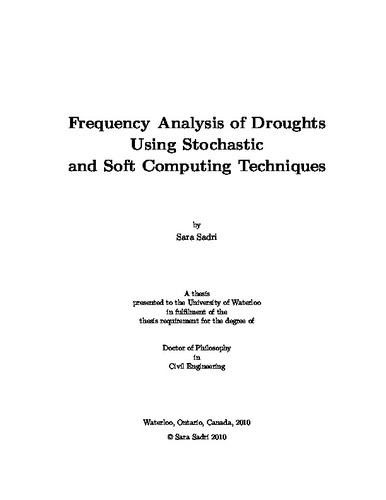 In the Canadian Prairies recurring droughts are one of the realities which can have significant economical, environmental, and social impacts. For example, droughts in 1997 and 2001 cost over $100 million on different sectors. Drought frequency analysis is a technique for analyzing how frequently a drought event of a given magnitude may be expected to occur. In this study the state of the science related to frequency analysis of droughts is reviewed and studied. The main contributions of this thesis include development of a model in Matlab which uses the qualities of Fuzzy C-Means (FCMs) clustering and corrects the formed regions to meet the criteria of effective hydrological regions. In FCM each site has a degree of membership in each of the clusters. The algorithm developed is flexible to get number of regions and return period as inputs and show the final corrected clusters as output for most case scenarios. While drought is considered a bivariate phenomena with two statistical variables of duration and severity to be analyzed simultaneously, an important step in this study is increasing the complexity of the initial model in Matlab to correct regions based on L-comoments statistics (as apposed to L-moments). Implementing a reasonably straightforward approach for bivariate drought frequency analysis using bivariate L-comoments and copula is another contribution of this study. Quantile estimation at ungauged sites for return periods of interest is studied by introducing two new classes of neural network and machine learning: Radial Basis Function (RBF) and Support Vector Machine Regression (SVM-R). These two techniques are selected based on their good reviews in literature in function estimation and nonparametric regression. The functionalities of RBF and SVM-R are compared with traditional nonlinear regression (NLR) method. As well, a nonlinear regression with regionalization method in which catchments are first regionalized using FCMs is applied and its results are compared with the other three models. Drought data from 36 natural catchments in the Canadian Prairies are used in this study. This study provides a methodology for bivariate drought frequency analysis that can be practiced in any part of the world.