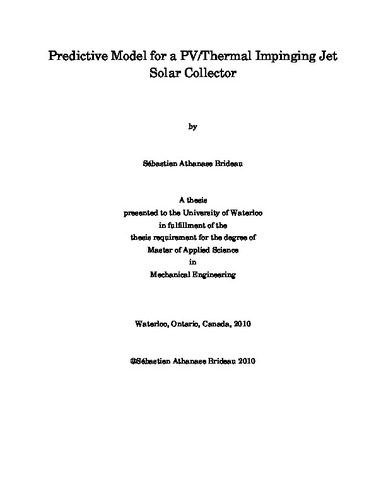 This thesis is a study of impinging jet PV/Thermal collectors. More specifically, the thesis deals with the development of a model for this type of collector and its validation. The model developed for this thesis consists of a series of energy balances at every layer of the collector. The transient effects due to thermal mass of the different layers were taken into account. The resulting differential equations were solved using the backwards Euler method in an iterative manner. The validation of the model was done using a prototype of the collector. The aperture area of the collector was 0.78m2 and the PV cells covered 0.27m2. The collector was tested on 8 different days between January 30th and March 31st 2010. The experiments were conducted with various weather conditions, and parameters (such as mass flow rate and inlet temperature). The data was taken every 0.5 seconds and averaged over 5 minutes. In general, the model was found to work very well. For March 31st, the total modeled heat gain for the day was found to be within 2.1% of the experimental data. The PV electrical energy was found to be within 4.4% of the experimental results. The model was also found to work well with longer time steps than 5 minutes. Furthermore, the model seemed to work relatively well without accounting for the transient effects due to thermal mass.