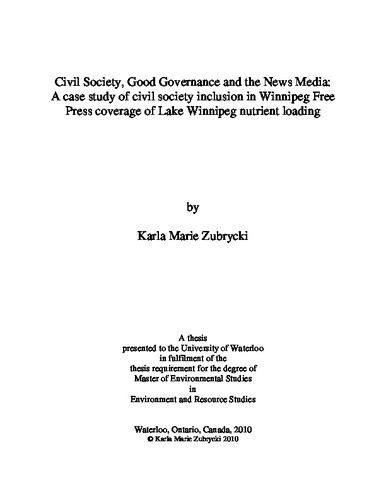 Governance and participatory democracy theory suggest that strong policy can stem from the inclusion of all societal voices in discussion of options, and that the public must have a strong base of information in order to participate fully in democracy. The news media can be an important vehicle for these voices and a central source of information. However, academic literature has recorded that “elite” sources, such as government, dominate news coverage to the disadvantage of “non-elite” sources, such as civil society groups and citizens, a situation that results in imbalanced information in the news. This thesis examines patterns of civil society inclusion in Winnipeg Free Press coverage of Lake Winnipeg water quality, and discusses the implications of findings for good governance. Three methods of inquiry are used: 1) a literature review, 2) a quantitative content analysis of newspaper articles published in the Winnipeg Free Press from August 1991 through December 2008, and 3) interviews with civil society members with an interest in Lake Winnipeg water quality. Content analysis findings indicate that civil society sources generally received less coverage than “elite” sources, were used less frequently, were given lower prominence within articles, had fewer chances to “define” coverage and were less often used in “hard” news compared to opinion sections. Interview findings challenge the dominant view within media literature that journalists are fully responsible for “elite” source dominance due to journalist bias in source selection, the “beat system” of journalism that focuses on governmental institutions, decisions made by editors and corporate or political preferences of news entities. While journalism practices are undoubtedly a factor, this study finds that there are also shortcomings within civil society organizations and the framework within which they operate that limit their engagement with the media. Four key factors are identified. Registered charities are often hesitant to speak with the media due to real and perceived legal restraints on their communications activities under Canada’s Income Tax Act. Many organizations are apprehensive about voicing concerns in the media for fear of losing funding. Few organizations have communications staff, or even staff members trained in media outreach, resulting in a passive approach to communications. And few organizations have the capacity to deal with media requests for information within journalism deadlines. In addition, the interview data indicate that those organizations actively pursuing media coverage are focusing attention on smaller newspapers, alternative media and self-published pieces, which suggests that the mainstream news media are perhaps of less importance to such organizations than in the past. Alternatively, it is possible that organizations are finding access to the mainstream media effectively cut off. Finally, recommendations are made to civil society organizations on how they can increase their prominence in the news and conquer their reluctance to deal with the media, and to the media on how to improve attention to civil society voices. For the latter, ideas are drawn from public journalism, a journalism movement which emphasizes citizens as sources.