The Commodification of Rural Heritage: Creative Destruction in Newfoundland and Labrador 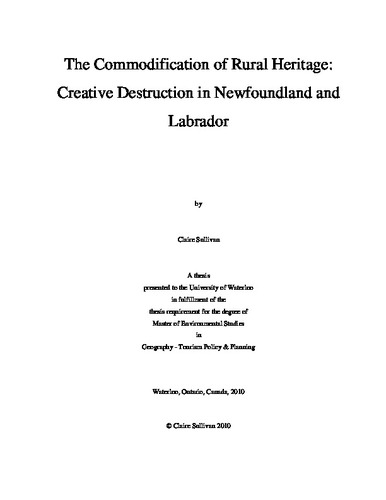 The intent of this study is to determine if the process of creative destruction is underway in a rural community located in Newfoundland and Labrador and to identify why this development sequence has or has not occurred. Three objectives underlie this study. The first is to determine at what stage Ferryland is situated in the Model of Creative Destruction. The second is to explain the community’s current stage in the model. The third objective is to provide recommendations for this community on its future development potential. These objectives were fulfilled through data collection that included: participant observation, content analysis of newspapers, and a review of relevant documents, key informant interviews, and resident and visitor surveys. This mixed method study concluded that the community of Ferryland is in the stage of advanced commodification in Mitchell’s (2009) Model of Creative Destruction. Three reasons are identified for its current state. First, the community lacks a tourism champion. Secondly, human capital shortage in Ferryland has created a lack of workers. Lastly, the actions of local stakeholders are not driven solely by the motivations outlined by Mitchell (2009). They are also underlain by the desire for pleasure; a motivation that does not appear to have encouraged fast-paced development. Furthermore, Ferryland is a community on a much smaller scale, which may have lessened perceived impacts and scale of development. Based on these conclusions, it is recommended that the Ferryland Tourism Committee creates a long-term plan for tourism that incorporates opinions of local residents.