Provincial Class Environmental Assessment: The Examination of Whether the Process can be Effectively Applied in a Northern Ontario Context 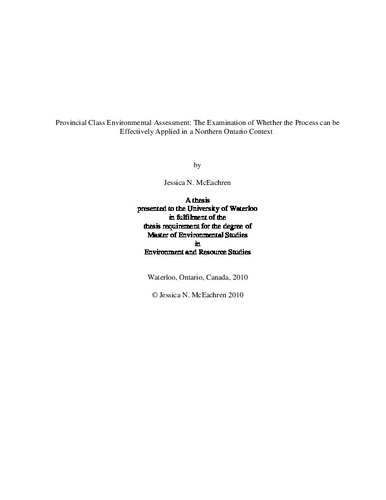 As Canada employs a federated system of government, there are separate environmental assessment (EA) processes. In Ontario, Canada, there is a streamlined, pre-approved, self-assessed process (i.e., the Minister of the Environment’s approval is not required) for “classes” of projects. These Class EA projects are routine, with known impacts, being predictable and mitigable, in a southern Ontarian environment. However, it is assumed that Class EA protocol developed in the southern Ontarian context is directly transferable to northern Ontario. A case-based approach, using the Victor Mine electricity transmission line project, was employed to critically examine whether the Class EA template developed in southern Ontario, could be effectively applied to the western James Bay region of northern Ontario. Specifically, the two assumptions (and corollaries) of Class EAs of predictability (corollaries: the environment is similar in all locations where Class EAs are applied; and the environment is well understood) and mitigability (corollary: all negative effects are mitigable) were examined. Primary (semi-directive interviews) and secondary (literature search) data were used to inform a themed analysis. Results indicate that the northern environment is unique: biophysically, the western James Bay area is Ontario’s only salt water coastal region, and contains one of the largest wetland regions in the world; and socio-economically, no southern Ontarian region can claim that one third of their total regional economy is related to subsistence pursuits. In addition, the northern environment is dynamic, disproportionately changing over time with respect to climate change and post-glacial isostatic adjustment. Moreover, not all negative effects are mitigable (i.e., the effects the existing electrical transmission line has had on waterfowl harvesting). Thus, the Class EA template is not transferable to the northern Ontarian context. Similarly, in other northern regions of the world where glacial isostatic adjustment is a reality and these regions uniqueness must be recognized and be reflected in the EA process, if a process exists.

Jessica McEachren (2010). Provincial Class Environmental Assessment: The Examination of Whether the Process can be Effectively Applied in a Northern Ontario Context. UWSpace. http://hdl.handle.net/10012/5133