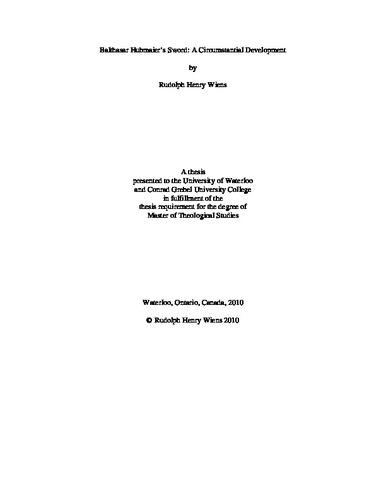 The sixteenth century Bavarian Anabaptist, Balthasar Hubmaier (ca. 1480-1528), has had a disputed role in Anabaptist historiography ever since his martyrdom in March, 1528. On the one hand he is known as the most erudite and prolific writer of the early Anabaptists, and on the other he has been separated from the original Zurich Brethren by his rejection of two major principles, total separation from the world and absolute non-resistance, that were supposedly held unanimously by the Zurich Brethren. Today Hubmaier’s reputation for militancy has been endorsed by most writers, but this militancy is not expressed in any of his writings except On the Sword, the last tract written before his death. Using the well-documented biography of Hubmaier by Bergsten and his own writings collected and translated by Pipkin and Yoder, the thesis explores the question of the extent to which Hubmaier was willing to advocate the use of lethal force by government or against government. It is found that only one source, Johann Faber, accused Hubmaier of inciting peasant revolt , and that witness would seem dubious by any modern standard. Arguments that Hubmaier was ostracized by the Zurich Brethren are found to be conjectural and dependent upon anachronism. Thus in the critical years 1524-26, Hubmaier was a veritable Swiss Brethren. On the Sword indicates a major change in Hubmaier’s thinking, and the reasons for that change are explored.