Diffusion-Reaction Modeling, Non-Linear Dynamics, Feedback, Bifurcation and Chaotic Behaviour of the Acetylcholine Neurocycle and Their Relation to Alzheimer's and Parkinson's Diseases 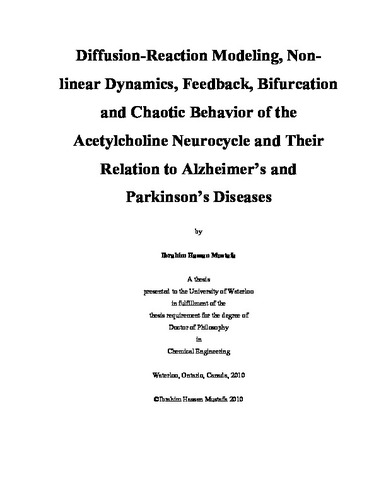 The disturbances and abnormalities occurring in the components of the Acetylcholine (ACh) neurocycle are considered one of the main features of cholinergic sicknesses like Parkinson’s and Alzheimer’s diseases. A fundamental understanding of the ACh neurocycle is therefore very critical in order to design drugs that keep the ACh concentrations in the normal physiological range. In this dissertation, a novel two-enzyme-two-compartment model is proposed in order to explore the bifurcation, dynamics, and chaotic characteristics of the ACh neurocycle. The model takes into consideration the physiological events of the choline uptake into the presynaptic neuron and the ACh release in the postsynaptic neuron. In order to approach more realistic behavior, two complete kinetic mechanisms for enzymatic processes pH-dependent are built: the first mechanism is for the hydrolysis reaction catalyzed by the acetylcholinesterase (AChE) and the other is for the synthesis reaction catalyzed by the cholineacetyltransferase (ChAT). The effects of hydrogen ion feed concentrations, AChE activity, ChAT activity, feed ACh concentrations, feed choline concentrations, and feed acetate concentrations as bifurcation parameters, on the system performance are studied. It was found that hydrogen ions play an important role, where they create potential differences through the plasma membranes. The concentrations of ACh, choline and acetate in compartments 1 and 2 are affected by the activity of AChE through a certain range of their concentrations, where the activity of AChE is inhibited completely after reaching certain values. A detailed bifurcation analysis over a wide range of parameters is carried out in order to uncover some important features of the system, such as hysteresis, multiplicity, Hopf bifurcation, period doubling, chaotic characteristics, and other complex dynamics. The effects of the feed choline concentrations and the feed acetate concentrations as bifurcation parameters are studied in this dissertation. It is found that the feed choline concentrations play an important role and have a direct effect on the ACh neurocycle through a certain important range of the parameters. However, the feed acetate concentrations have less effect. It is concluded from the results that the feed choline is a more important factor than the feed acetate in ACh processes. The effects of ChAT activity and the choline recycle ratio as bifurcation parameters, on the system performance are investigated. It was found that as the ChAT activity increases, ACh concentrations in compartments 1 and 2 increase continuously. The effect of the choline recycle ratio shows that choline reuptake plays a very critical role in the synthesis of ACh in compartment 1, where it supplies the choline as a substrate for the synthesis reaction by ChAT. The concentrations of ACh, choline and acetate in compartments 1 and 2 are affected by the choline recycle ratio through a certain range of the choline recycle ratio; then, they become constant as the choline recycle ratio increases further. It is concluded from our results that choline uptake is the rate limiting step in the ACh processes in both compartments in comparison to ChAT activity. Based on partial dissociation of the acetic acid in compartments 1, and 2 of the ACh cholinergic system, the two-parameter continuation technique has been applied to investigate the pH range to be closer to physiological ranges of pH values. In addition, static/dynamic solutions of the ACh cholinergic neurocycle system based on feed choline concentration as the main bifurcation parameter in both compartments have been investigated. The findings of the above studies are related to the real phenomena occurring in the neurons, like periodic stimulation of neural cells and non-regular functioning of ACh receptors. It was found that ACh, choline, acetate, and pH exist inside the physiological range associated with taking into consideration the partial dissociation of the acetic acid. The disturbances and irregularities (chaotic attractors) occurring in the ACh cholinergic system may be good indications of cholinergic diseases such as Alzheimer’s and Parkinson’s diseases. The results have been compared to the results of physiological experiments and other published models. As there is strong evidence that cholinergic brain diseases like Alzheimer’s disease and Parkinson’s disease are related to the concentration of ACh, the present findings are useful for uncovering some of the characteristics of these diseases and encouraging more physiological research.