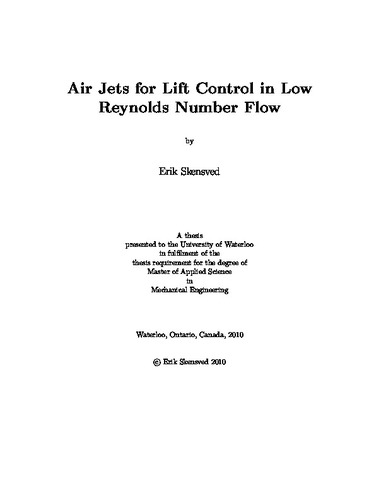 The environmental and monetary cost of energy has renewed interest in horizontal-axis wind turbines (HAWT). One problem with HAWT design is turbulent winds, which cause cyclic loading and reduced life. Controlling short-term aerodynamic fluctuations with blade pitching or mechanical flaps is limited by the speed of actuation. The objective was to investigate using jet-flap-like fluidic actuators on the 'suction surface' of an aerofoil for rapid aerodynamic control. A NACA 0025 aerofoil was constructed for wind-tunnel experiments. The low Reynolds number (Re) flow was measured non-intrusively with particle image velocimetry (PIV). The jet showed limited effect compared to published work. The sharp trailing edge and distance to the jet were determined to be critical factors. At Re≈100000 the 'suction surface' jet sheet is less useful for control than the conventional 'pressure surface' sheet. The experiment suggests usage near the blade root on truncated aerofoils.