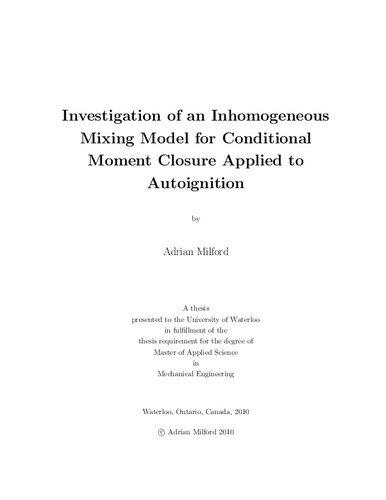 Autoignition of high pressure methane jets at engine relveant conditions within a shock tube is investigated using Conditional Moment Closure (CMC). The impact of two commonly used approximations applied in previous work is examined, the assumption of homogeneous turbulence in the closure of the micro-mixing term and the assumption of negligible radial variation of terms within the CMC equations. In the present work two formulations of an inhomogeneous mixing model are implemented, both utilizing the β -PDF, but diﬀering in the respective conditional velocity closure that is applied. The common linear model for conditional velocity is considered, in addition to the gradient diﬀusion model. The validity of cross-stream averaging the CMC equations is examined by comparing results from two-dimensional (axial and radial) solution of the CMC equations with cross-stream averaged results. The CMC equations are presented and all terms requiring closure are discussed. So- lution of the CMC equations is decoupled from the ﬂow ﬁeld solution using the frozen mixing assumption. Detailed chemical kinetics are implemented. The CMC equations are discretized using ﬁnite diﬀerences and solved using a fractional step method. To maintain consistency between the mixing model and the mixture fraction variance equation, the scalar dissipation rate from both implementations of the inhomogeneous model are scaled. The autoignition results for ﬁve air temperatures are compared with results obtained using homogeneous mixing models and experimental data. The gradient diﬀusion conditional velocity model is shown to produce diverging be- haviour in low probability regions. The corresponding proﬁles of conditional scalar dis- sipation rate are negatively impacted with the use of the gradient model, as unphysical behaviour at lean mixtures within the core of the fuel jet is observed. The predictions of ignition delay and location from the Inhomogeneous-Linear model are very close to the homogeneous mixing model results. The Inhomogeneous-Gradient model yields longer ig- nition delays and ignition locations further downstream. This is inﬂuenced by the higher scalar dissipation rates at lean mixtures resulting from the divergent behaviour of the gradient conditional velocity model. The ignition delays obtained by solving the CMC equations in two dimensions are in excellent agreement with the cross-stream averaged values, but the ignition locations are predicted closer to the injector.