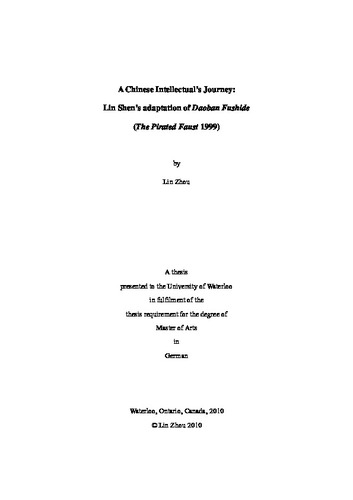 This thesis has as its focus Daoban Fushide 盗版浮士德 (The Pirated Faust), a Chinese staging of Goethe’s Faust I and II, which premiered in Beijing in 1999. The research questions of the study are how the adaptation remains true and differs from Goethe’s original and how it addresses the expectations and cultural sensitivities of modern Chinese society. The first and second chapters provide a general context of the discussion. Chapter one reviews Faust reception in China, including the Chinese publication of Faust in translation, critical assessments of Faust by Chinese scholars, and theatre productions adapted from Goethe’s original. Chapter two outlines the history of Chinese theatre from the ancient rituals to traditional Chinese theatre as it survives in modern times. With the influence of western culture a new theatrical form, spoken drama, emerged in the early 20th century. The Pirated Faust is an example of modern Chinese experimental theatre. Chapter three, the main part of the study, provides a systematic analysis of this Chinese Faust adaptation from numerous perspectives, including an explanation and discussion of the title, storylines, a structural comparison to Goethe’s original, and an analysis of the adaptation’s use of language, themes, characters, and settings. My study demonstrates that this Chinese adaptation is a recodification of Goethe’s classic in the context of Chinese modern society, deeply rooted in Chinese cultural and historical background. However, it still maintains the thematic thrust of Goethe’s original. Another accomplishment of this study is a complete English translation of the Chinese text of the adaptation, the only in existence, which is appended to the thesis. It provides the opportunity for non-Chinese readers who have an interest in Faust in China and The Pirated Faust to do further research.