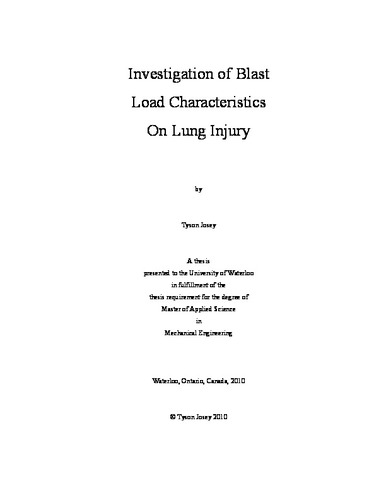 In many parts of the world, civilians and peacekeepers are exposed to potentially serious injury from blasts and explosions. Providing insight into the trauma thresholds for blast injury is necessary for the development of blast protection equipment and identification and subsequent treatment of blast injury. [Phillips, 1988] Blast injury can be categorized as primary, secondary, tertiary, quaternary and quinernary, corresponding to different aspects of the blast loading and injury mechanisms. Primary blast injury occurring in the lungs is of importance, since lung injury results in one of the highest rate of blast mortality. Much of the existing blast injury data was obtained from animal testing with sheep and subsequently extrapolated to humans using scaling techniques. More recently, mathematical, experimental and numerical models have been developed and employed to investigate blast injury. In this study, a detailed finite element model of a sheep thorax and human thorax (developed at the University of Waterloo) was used to predict primary blast lung injury based on a range of blast loading conditions. The models were developed based on available anatomical data and material properties to model the organs and tissues, and were evaluated using the LS-Dyna explicit finite element code. The models were previously validated for the prediction of lung PBI using Friedlander-type blast waves. All results were compared to existing literature to further verify and validate the numerical models as wells as to provide insight on the effect of loading conditions on blast injury. The blast loading input for these simulations used idealized blast waves, based on a blast physics approach. Blast loads were verified using the Chinook CFD software. The effects of idealized blast waves on predicted lung injury were investigated to determine the importance of peak pressure, blast wave duration and impulse. The duration and peak pressures for the waves were selected based on the Bowen and UVa curves, and included a right angle triangular shape and a square wave to allow for the different parameters to be considered. These results were compared to the Bowen and revised Bowen injury models. The results show that the peak overpressure is dominant in predicting injury for blast loads with long durations (>8 ms). The impulse was dominant in predicting injury for blast loads with short durations (<1 ms). For blasts loads with intermediate durations (1 ms < 8 ms) both the shape of the blast load wave and peak overpressure play a role in primary blast lung injury. The effect of orientation of the body position on primary blast lung injury was investigated. Simulations were performed using the sheep and human numerical models along with a model of a commonly used experimental device, the Blast Test Device (BTD) cylinder. These models were oriented in different positions by rotating the body relative to the blast flow. Injury results for the BTD were calculated using the Injury 8.1 injury prediction software. The BTD simulations served several purposes; it was used as a reference for the human and sheep simulations and its effectiveness as a tool to predict body orientation was evaluated. In general, all of the models predicted appropriate and similar levels of injury for the body in its default orientation, and these predictions were comparable to the accepted injury levels for this insult. For other orientations the BTD was not able to predict the appropriate blast injury. This highlighted the importance of proper placement and orientation of the BTD when used in simulations or physical experiments. The overall injury (based on the results from the right and left lung) predicted by the sheep and human thorax was similar for all orientations. However, very different results were obtained when the predicted injury for the right and left lungs was compared. The differences between the sheep and the human were examined and the differences in injury between the right and left lung is a result of the differences in anatomy between the two species. This study has evaluated the importance of blast wave parameters in predicting primary blast injury, an important consideration for the improvement of blast protection, and the effect of body orientation on primary blast injury, an important consideration for experimental testing and a starting point for the evaluation of complex blast loading. Future work will focus on the evaluation of injury in complex blast environments.