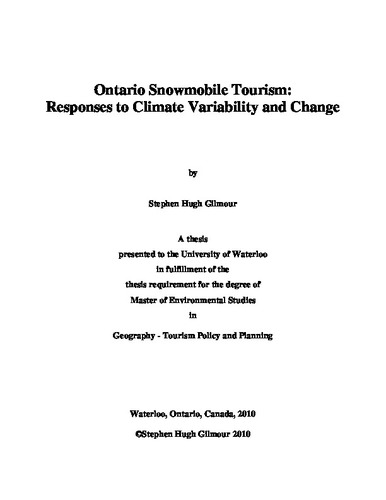 A suitable climate, varied scenic terrain, and proximity of communities along Ontario’s system of 39,742 km of snowmobile trails have provided for domestic and international snowmobile tourism. Outdoor winter tourism in many parts of the world has been identified to be at risk to changes in global climate. The Intergovernmental Panel on Climate Change in its Fourth Assessment Report (AR4) reported a global increase of temperature of 0.74 degrees Celsius for the period 1906 to 2005 and estimates that by the end of the 21st century the global mean temperature will increase between 1.8 degrees Celsius to 4.0 degrees Celsius. Temperature increases of only a few degrees may contribute to variances in snow-based tourism reliant on the reliability of natural snow cover. This study examines the spatial and temporal impacts of climate change scenarios upon snowmobile season length and operations within the snowmobile industry in the Province of Ontario Canada to six climate change scenarios for the 21st century. Snowmobile trail operations in Ontario are reliant upon a minimum natural snow cover of 15 cm for smooth terrain trails and 30 cm to 60 cm for rough terrain trails, temperatures less than 0 degrees Celsius and, human and financial capital. Three or more consecutive snowmobile seasons with ≤ 28 days have been identified as having serious implications for human and financial capital necessary to develop and maintain the snowmobile trail system. As early as the 2020s, north eastern snowmobile districts are projected to be least vulnerable to changes in climate with the longest snowmobile seasons > 28 days, while south central snowmobile districts are projected to be the most vulnerable to changes in climate with the shortest snowmobile seasons of < 28 days. Snowmobile trail managers identified possible strategies to adapt to a changing climate (2020s to 2080s) including: pre-season preparation of the terrain including early season packing of snow cover, re-location of the most vulnerable snowmobile trails, and strengthening inter-district alliances.