Investigating the impacts of time-of-use electricity rates on lower-income and senior-headed households: A case study of Milton, Ontario (Canada). 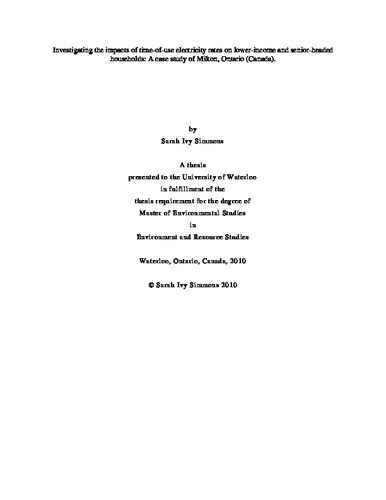 Through the Smart Metering Initiative in the Canadian province of Ontario, all residential electricity customers will be converted from a tiered rate regime to a time-of-use (TOU) rate regime by the year 2010. Although TOU rates are designed to be cost-neutral for the average consumer, research suggests that TOU rates may affect consumers differently depending on their socioeconomic characteristics. In an effort to better understand the effects of TOU rates on lower-income and senior-headed households, a case-study in Milton was conducted between June and December of 2007. The overarching thesis question is: What are the behavioural responses to, and financial impacts of, TOU electricity rates on lower-income and senior-headed households? Nine expert interviews were conducted with Ontario professionals working in government, environmental non-profit groups, citizen advocacy organizations and affordable housing associations in order to provide context for the study. Time-differentiated electricity consumption data were then collected from 199 households from two senior housing complexes and two affordable housing complexes in Milton, Ontario between June and December 2007. A questionnaire was also sent to each household to determine some socio-economic and structural characteristics of the households. The electricity consumption data collected from the four sites suggest that the households would not benefit financially from TOU rates given electricity consumption behaviour during the period prior to the implementation of TOU rates in June 2007. Thus, they would have to change their behaviour in order to benefit financially from TOU rates. During this pre-TOU period, Site A, Site B and Site C would have paid more, on average, for their electricity under TOU rates than on tiered rates ($0.34, $0.61 and $0.15 per week, respectively). While Site D, on average, would have seen no change under TOU rates. A conservation effect was detected by comparing the electricity consumption from billing periods in 2006 to corresponding billing periods in 2007 after the implementation of TOU rates. Site A saw a conservation effect during the first corresponding billing period (35%); while Site B saw a conservation effect for three corresponding billing periods (21%, 24% and 9%). Site C saw a conservation effect for the first five corresponding billing periods (ranging from 8% to 21%), while Site D saw a conservation effect for all corresponding billing periods (ranging from 10% to 34%). The presence of a conservation effect at Site D was unexpected, particularly because households at Site D are not responsible for paying their own electricity bills. Although a conservation effect was observed after the implementation of TOU rates, the extent to which it could be attributed to the implementation of TOU rates is unclear, and should be investigated further. There was no considerable shift in the proportion of electricity consumed during each of the peak periods during the summer TOU period for Site A and Site D after the introduction of TOU rates. There was, however, a slight reduction in the portion of electricity consumed during the summer TOU period for Site B and Site C (0.2% and 0.1% per week, respectively). Due to the change in the on-, mid- and off-peak schedule from the summer TOU period to the winter TOU period, the households consume more electricity during the off-peak periods in the winter than they do during the off-peak periods in the summer (even though their patterns of consumption do not change). Similar to the pre-TOU period, during the summer post-TOU period, Site A and Site B, and Site C, on average, paid more for electricity (commodity) under TOU rates than they would have paid if they had continued on tiered rates ($0.38, $0.51 and $0.16 more per week, respectively), while Site D would have seen no change in their electricity costs. In contrast, during the winter post-TOU period several sites paid less for electricity on TOU rates than they would have if they had continued on tiered rates. Site B, Site C and Site D paid, on average, $0.78, $0.16 and $1.76 less per week, respectively. Although Site A paid more under on TOU rates during the winter post-TOU (on average $0.18 more per week), the cost was less than during the summer post-TOU period. The change in costs expressed here does not reflect any reduced costs that may have resulted from conservation. For example, if the households were shown to have a conservation effect, they might have lower electricity costs. Additionally, the changes in costs do not reflect any additional fees or charges that might be attributed to the smart meter installation and the Smart Metering Initiative (e.g., additional fees from Milton Hydro). In conclusion, TOU rates appear to be ineffective at motivating these lower-income and senior-headed households in Milton, Ontario to shift electricity from on-peak periods to off-peak periods, however, a reduction in electricity usage may be attributed to TOU rates. Further research is required to confirm these effects. It is important to note that some of the lower-income and senior-headed households in this study appeared to see an increase in their electricity bill, particularly during the summer TOU period. Lower-income and senior-headed households are thought to be less able to shift electricity consumption, therefore it is important to develop mechanisms to identify households that are at risk of bill increases.