A Contemporary Examination of the A Fortiori Argument Involving Jewish Traditions 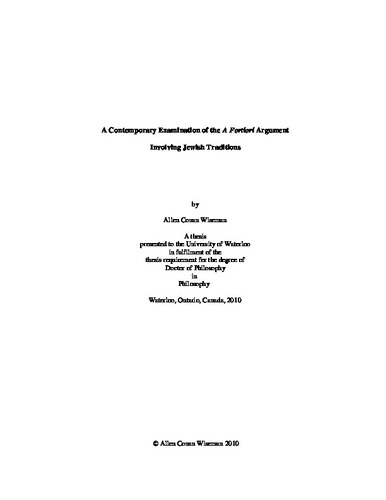 This study proposes to clarify the a fortiori argument’s components, structure, definitions, formulations, and logical status, as well as the specific conditions under which it is to be employed, both generally and in a Jewish context. Typically, the argument claims this: if a lesser (or greater) case has a feature, a correspondingly greater (or lesser) case has that feature too. While evident in ancient thought, the argument is often central to Jewish deliberations that may continue for centuries; so this Jewish use forms the main context and material of this study. However, as general reasoning employs the argument, tracing its common forms helps to delineate its terms and relations. While the argument aspires to be true and it can be deductively valid in those cases where heritable properties recur, it is more likely to be inductively probable. In any case, the thesis presents a number of deductive formalizations, while more complex treatments are left to the appendix or further study. Inasmuch as the a fortiori is claimed to be a type of analogy, both its likenesses and its differences are set out and exemplified in a number of comparative mathematical, practical, legal, and other formats. Once the conclusion’s feature is deductively valid or inductively likely, the amount that one accords to the feature in the new case needs to be determined. Logically, the a fortiori’s conclusion can be either limited to the same feature given in one of its premises or else proportioned to it in a way that suits both premises. Mathematically, the same outcome is just one possible ratio. However, the early Jewish stand of the Mishnah usually retains the same tradition or least onerous result as sufficient (the dayo) for the new case. A detailed analysis covers this and later Rabbinic use, and especially Maccoby’s recent claim that the same given alone is correct, which I show to be extreme, for even in a Jewish context it generates several problems. When one includes sensible a fortiori proportions and the possibility of mercy, good moral reasoning can be reconciled with true religious values and traditional precedents. In all, the conclusion’s amount, particularly in practical issues, involves an extra decision procedure that considers the relevant factors of the actual case. Once the a fortiori’s informal and formal aspects are dealt with adequately and its fallacious uses avoided, the argument’s overall reasonableness is better appreciated.