Design, Fabrication and Control of a Magnetic Capsule Robot for the Human Esophagus 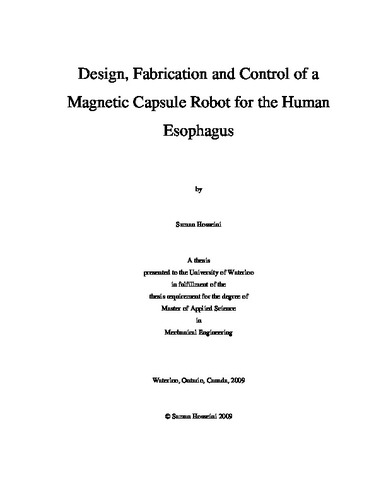 Biomedical engineering is the application of engineering principles and techniques to the medical field. It combines the design and problem solving skills of engineering with medical and biological sciences to improve healthcare diagnosis and treatment. As the result of improvements in robotics and micro technology science in the 20th century, micro electromechanical system technology has joined with medical applications which results in micro robotic medical applications. Drug delivery is one of the most important and controversial topics which scientists and engineers have tried to improve in medical applications. For diseases like cancer, localized drug delivery is a highlight target involving bombarding a small area of a human’s body and this technology has not been completely achieved yet. The ultimate objective of this thesis is the development of wireless capsule robot controlled by a magnetic drive unit. A magnetic drive unit is a system that consists of electromagnets, which produce the magnetic field from outside of the patient’s body. The capsule robot, which is the slave robot in the system, moves inside a human’s gastrointestinal tract. This project is focused mainly on a human esophagus and all the experiments are done in a prototype of the human’s esophagus. Drug delivery for diseases like cancer is the objective of the capsule robot. The proposed design consists of a slave permanent magnet for the motion of capsule robot in a tube, a reservoir of drug, and a micro mechanical mechanism for drug release. The capsule robot is fabricated and developed in a 12mm length and 5mm diameter with the weight of 1.78 grams without the built-in permanent magnet. The drug delivery system is a semi-magnetized system, which can be controlled by an external magnetic field. It consists of a mechanical plunger and spring, which can be open and close through an external magnetic field manipulation. The amount of drug for a desired location can be controlled by manipulating the external magnetic field. To achieve this target, analytical modeling is conducted. A numerical simulation and an experimental setup demonstrate that a capsule robot in a human esophagus in a simple and multi channel system. Horizontal control is set for the capsule robot, using a custom-designed controller and a colored liquid is released with the external magnetic field. The present study with its fabricated prototype is a research is this area to prove the concept of wireless control of a robot inside a human body and the potential for a drug delivery system. It is expected that the results achieved in this project will help realize and promote capsule robot for medical treatments.