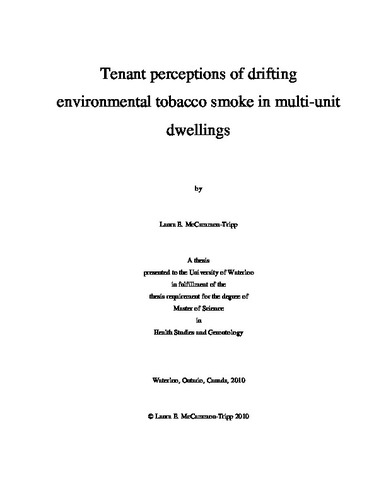 Background and Objectives: Environmental tobacco smoke (ETS) is widely recognized as a serious health hazard. No safe level of exposure to ETS has been identified (USDHHS, 2006; WHO, 2007). The importance of smoke-free spaces in improving health outcomes for both smokers and non-smokers is clearly understood and as such, many individuals living in Ontario have made their homes smoke-free. Although those living in units within multi-unit dwellings (MUDs) have the option of making their own unit smoke-free, they may still be involuntarily exposed to ETS drifting from smoking units to their unit. The present study explores tenant’s perceptions of this drifting ETS and the potential market for smoke-free rental housing. Methods: Anonymous surveys were sent to 3724 households within rented MUDs (apartments and row housing) with five or more units in Kitchener, Ontario. In addition to demographic questions, the survey addressed respondents’ experiences with, perceptions of, and reactions to drifting ETS and their views on smoke-free rental housing. Three hundred and five surveys were returned, and 291 met the final inclusion criteria to be included in the analysis. Survey data were weighted by age and education level. Descriptive analyses and logistic regression models were run to answer the research questions. Results: Over half of the respondents who do not smoke in their unit on a daily basis indicated they were exposed to drifting ETS in their home at least ‘sometimes’. Of those who were exposed, 89.5% were bothered and nearly half were bothered ‘a lot’. This suggests drifting ETS is a concern for many tenants living in MUDs. The majority of tenants indicated they did not live in a smoke-free building however there was a strong interest in smoke-free rental housing. Nearly 90% of tenants showed at least some interest in smoke-free rental housing, and many tenants would prefer to live in a building with the strongest possible restrictions on smoking in place. Younger tenants, non-smokers, those who spent less time at home on weekends and those who perceived indoor smoking as a fire risk were more likely to be interested in smoke-free rental housing. Conclusions and Significance: This study provides insight into the magnitude of the problem of drifting ETS in MUDs and can be used to inform policy on smoke-free MUDs. Many respondents indicated they were exposed to drifting ETS and the majority of those who were exposed were bothered by this exposure. There also appears to be a strong market for smoke-free rental housing. The response rate for this study was low at 8.5% and as such the results must be interpreted with caution. Future research should be completed in other jurisdictions and with larger sample sizes. Landlord surveys and air quality monitoring studies are also needed. While additional research is needed, the current study suggests this is an important public health issue, and provides additional evidence supporting the need to explore policy options in the public and private realm for smoke-free housing.