The Lifestyles and Sexual Health of Canadian Snowbirds 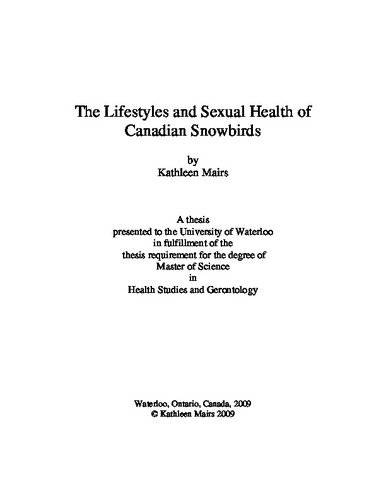 Background. Little is known about HIV risk-behaviour and testing amongst older Canadians. In the United States the prevalence of HIV for those aged 50+ is highest in Florida, a location where many Canadian seniors winter. This small-scale pilot study examined the dating and sexual behaviour of Canadian snowbirds while in Florida, to determine their risk for HIV. This area deserves increased attention as the proportion of older Canadians infected with HIV is increasing. Methods. A broad cross-section of Canadian snowbirds were surveyed. Eligible participants were: aged 50+, visited Florida in the past 12 months and stayed for 1+ month on their latest trip, and live in Canada for 6+ months each year. Univariate and bivariate frequencies were primarily reported due to the descriptive research objectives. Multivariate logistic regression analysis was used to assess factors associated with HIV testing. Results. The study sample consisted of 299 participants, with more males (53.51%), more married participants (78.6%) and a mean age of 66.86 years. One quarter (23.14%) of the sample had dated in the past five years. Of these daters, 5.36% dated in Florida, 41.07% dated in Canada and 53.57% dated in both locations. Over three-quarters of daters in both Canada (79.49%) and Florida (77.78%) engaged in sex with their dates in the previous year. Few daters in Canada (20%) and Florida (14.29%) used condoms consistently with their dates. Only 17.7% of the sample had ever HIV-tested. The odds of HIV testing were increased for: those aged 50-65, the unmarried, those who had discussed sexual risk-behaviour with a physician and those who indicated that sex was important. Dating males were twice as likely to test as non-dating males; and 14 times more likely to test than females who dated. Conclusions. Sexual risk-behaviour is occurring within the Canadian snowbird population, especially amongst the unmarried. In both Canada and Florida, most snowbirds did not use condoms consistently with dates, many reported multiple sexual partnerships and few had HIV-tested. Overall, this research supports the need for a large-scale study to further understand the social and sexual interactions of Canadian snowbirds to determine their risk for HIV.