Numerical Modelling of the Effects of High Strain Rate, Strain Path and Particles on the Formability of FCC Polycrystals 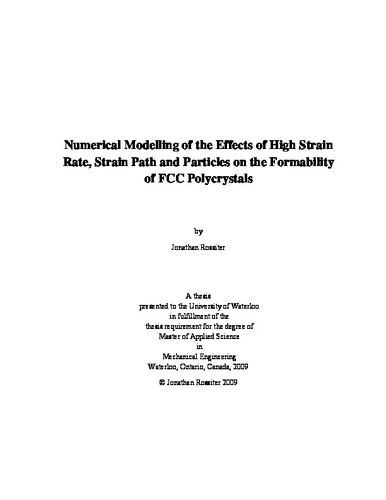 A new crystal plasticity scheme for explicit time integration codes is developed based on a forward Euler algorithm in the first part of this paper. The new numerical model is incorporated in the UMAT subroutine for implementing rate dependent crystal plasticity model in LS-DYNA/Explicit. The material is modeled as a Face centered cubic (FCC) polycrystalline aggregate, and a finite element analysis based on rate-dependent crystal plasticity is developed to simulate large strain behaviour. Accordingly, an element or a number of elements of the finite element mesh is considered to represent a single crystal within the polycrystal aggregate and the constitutive response at a material point is given by the single crystal constitutive model. The second part of this thesis presents two applications of the crystal plasticity scheme used in conjunction with numerical modeling of three-dimensional (3D) real microstructures. First, finite element meshes containing both particle and texture data are created with solid elements. Particle size, location and orientation are represented by 3D ellipsoids and the elements within these ellipsoids are given rigid properties. Simulations of in-plane plane strain with different combinations of texture and particle location are performed. The effect on texture development, strain magnitudes, and strain localizations is investigated. Second, the three dimensional (3D) polycrystalline microstructure of the aluminum alloy AA5754 is modeled and subjected to three different strain rates for each strain path. The effect of strain paths, strain rates and thermal softening on the formation of localized deformation is investigated. Simulations show that strain path is the most dominant factor in localized deformation and texture evolution.

Jonathan Rossiter (2010). Numerical Modelling of the Effects of High Strain Rate, Strain Path and Particles on the Formability of FCC Polycrystals. UWSpace. http://hdl.handle.net/10012/4913