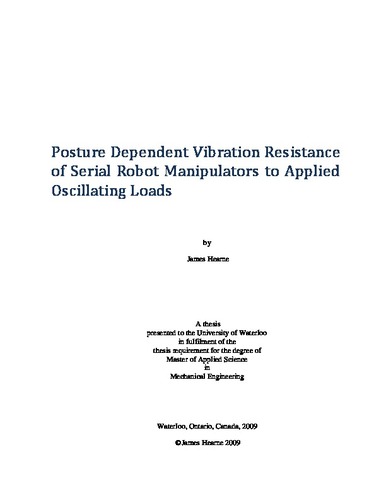 There are several advantages to replacing CNC machinery with robotic machine tools and as such robotic machining is emerging into the manufacturing and metal cutting industry. There remain several disadvantages to using robots over CNC stations primarily due to flexibility in robotic manipulators, which severely reduces accuracy when operating under high machining forces. This flexibility is dependent on configuration and thus the configuration can be optimised through posture selection to minimise deflection. In previous work little has been done to account for operating frequency and the additional complications that can arise from frequency dependent responses of robotic machine tools. A Fanuc S-360 manipulator was used to experimentally investigate the benefits of including frequency compensation in posture selection. The robot dynamics first had to be identified and experimental modal analysis was selected due the inherent dependency on frequency characteristics. Specifically, a circle fit operation identified modal parameters and a least squares optimisation generated dynamic parameters for a spatial model. A rigid-link flexible-joint model was selected and a pseudo-joint was used to create an additional DOF to accommodate link flexibility. Posture optimisation was performed using a gradient-descent algorithm that used several starting points to identify a global minimum. The results showed that a subset of modal data that excluded the mode shape vectors could be used to create a model to predict the manipulator vibration response. It was also found that the receptance variation of the manipulator with configuration was insufficient to verify the optimisation throughout the entire selected workspace; however the model was shown to be useful in regions containing multiple peaks where the modelled dynamics were dominant over the highly volatile measured data. Simulations were performed on a redundant planar manipulator to overcome the lack of receptance variation found in the Fanuc manipulator. These simulations showed that there were two mechanisms driving the optimisation; overall amplitude reduction and frequency specific amplitude reduction. Using a stiffness posture measure for comparison, the results of the frequency specific reduction could be separated and were found to be particularly beneficial when operating close to resonant frequencies.