Do landscape and patch spatial variables predict the presence of non-indigenous plant species? 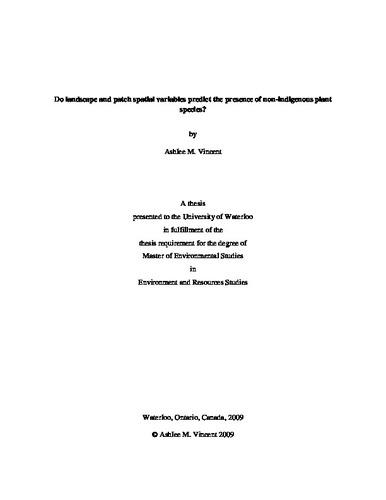 Studies in the fields of invasion and landscape ecology suggest that there is certainly a spatial component to the spread and establishment of exotic plant species. An understanding of how patch dynamics affects the dispersal process is necessary for effective management of invasive or problematic exotic plant species. However, studies that have specifically compared spatial attributes of natural areas with exotic plant species diversities (or abundances) have had disparities in their scale or methodology, and incongruent results. I sought to answer the question of whether landscape and patch variables (or soil texture) can predict the presence of exotic plant species in natural areas, using a case study of the cities of Kitchener and Waterloo, Ontario, Canada. The objective of this study was to determine whether landscape and patch variables can be used (albeit most effectively with long-term monitoring) as part of a management plan and monitoring priority list for Kitchener and Waterloo’s urban natural areas. I collected vegetation and soil data at 98 edge and core sites in 5 natural areas, ranging in size from 16 – 146 ha. In total, 19 exotic and 39 native herbaceous species, and 11 exotic and 43 native tree and shrub species occurred in the 490 sampling plots at 98 sites. Using Usher’s (1988) index of invasion, the parks cumulatively had 33% invasion of their herbaceous layer and 20% invasion of their shrub/tree layer. I conducted Kruskal-Wallis tests of the non-parametric data (for both species diversities and abundances) and results showed that native herbaceous, tree and shrub species richness was significantly higher than exotic species at core and edge sites at 4 of the 5 parks (Doon had significantly higher numbers of exotic species than native species at its edge sites). No significant relationship was found between soil texture and the presence of exotic herbaceous plants, tree or shrubs at any of the parks. Additionally, no significant relationship was found between any of the spatial attributes measured and exotic plant species diversities, although total park area, # of disjunct core areas, and perimeter: area ratio were the three strongest predictors of exotic plant species abundances. These results indicate that native plant species in Kitchener and Waterloo’s urban natural areas are successfully out competing exotic plant species or, alternatively, that their core areas have become as equivalently invaded as their edges. Longer term and larger scale studies are necessary to substantiate these findings but smaller parks and parks with higher perimeter: area ratios should still be a management focus. Fragmentation of current natural areas and urbanization in close proximity to natural areas should also be minimized or avoided to decrease the risk of new invasions and establishment and exotic plant species.