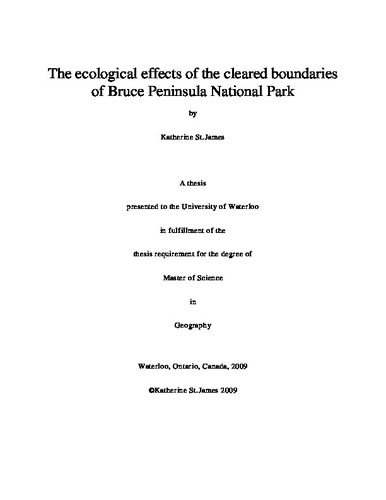 Bruce Peninsula National Park (BPNP) clears a 2 m swath of trees on the boundary in order to make it clear when one is entering the park from any neighbouring land; this in particular aims to protect the park and its inhabitants from illegal actions such as hunting and logging. This study looks at the ecological effects of this practice by measuring various microclimate variables and the abundance of eastern redback salamanders (Plethodon cinereus) on the boundary and comparing these measurements to parallel transects at 5, 10, 15, 20, and 40 m. Because it is a small linear development, it is then compared to other types of linear developments, such as roads, trails, and pipelines. The microclimate variables of air temperature, slug abundance, canopy cover, soil pH, total cover area, litter depth, and relative humidity were all significantly affected (p<0.05) up to 10 m into the adjacent forest, indicating that the cleared boundaries do change the surrounding microclimate. Soil pH, downed woody cover area, litter depth, and canopy cover were significantly affected (p<0.05) up to 5 m away from the boundary. Sixty hectares, or 0.4%, of the land area of BPNP is thus affected by the microclimate changes caused by the cleared boundary. These effects are similar to those found for other narrow, vegetated linear developments such as trails. Over double the number of salamanders were found on the boundary as compared to in the forest; this is due to higher cover area availability on the cleared boundary from the felled trees. Therefore, the boundary does not act as a barrier to eastern redback salamander movement, nor does it fragment the local population. Salamander abundance was best explained by the amount of cover area, snail abundance, and the dominant type of vegetation present along transects. It was also found in an additional study that salamander abundance tended to increase with increasing days since the last precipitation event, contrary to most woodland salamander monitoring protocols and methods. The boundaries were seen also to be used by hunters and recreationalists through incidental observations of human disturbance. This increased access to remote areas of the park through use of the cleared boundaries is an issue that requires further study, as the boundary itself may be leading to an increase in illegal activity. Recommendations to BPNP include leaving downed woody cover on the boundary, minimizing the boundary width, reducing lines of sight, decreasing accessibility, increasing landowner and park staff education, communicating with adjacent landowners, and securing funding to complete and maintain the boundary clearing.