A Realist Critique of Structural Empiricism 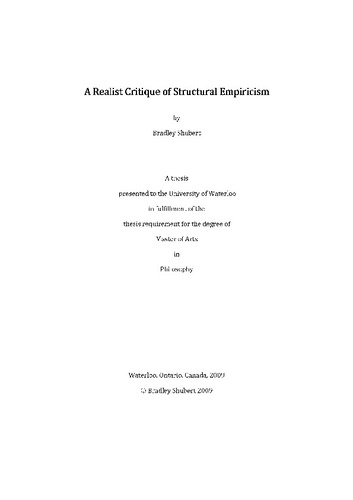 In his latest work, Scientific Representation: Paradoxes of Perspective, Bas van Fraassen has argued for a position he describes as empiricist structuralism. This position embraces a structuralist view of science which contrasts with increasingly popular structural realist accounts of science. Unlike structural realists about science, who argue that we can be realist about theoretical structure preserved across successive scientific paradigms, van Fraassen claims that this preserved structure is little more than the structure of our ordinary empirical observations. Those structural aspects of scientific theory which extend beyond this empiricist core can be regarded as purely theoretical postulates about which we are not entitled to be realist. In this way, van Fraassen maintains a common-sense realism about those observable objects and processes of everyday experience, while concurrently holding anti-realist views about those objects and processes which are unobservable. I argue, however, that on a more considered analysis, many of the most mundane objects and processes which van Fraassen wants to be realist about do not seem to meet his own criteria for observability. Once taken to its logical conclusions, empiricist structuralism leaves us in a far more anti-realist position than van Fraassen imagines and undermines many of the motivations for holding such a position at all. I offer alternative suggestions for a more plausible realist account of scientific practice.