Deadly in pink: The impact of female-oriented cigarette packaging on brand appeal, beliefs about smoking, and risk perceptions among young women 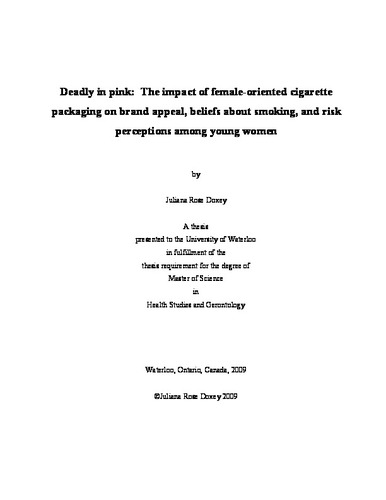 Industry documents and anecdotal evidence suggest that cigarette packaging can target women by enhancing brand appeal and influencing important beliefs about smoking. Little research has been conducted on how cigarette pack design might contribute to young women's faulty beliefs about smoking. This study sought to identify package designs that promote misleading beliefs about the health effects of smoking and the relationship between smoking and weight control, and that increase brand appeal among young women; as well as the extent to which plain packaging reduces these beliefs. A between-subjects experiment was conducted in which 512 participants between the ages of 18-25 years viewed cigarette packs using a computerized survey in one of four conditions: female-oriented (n = 141); female-oriented with descriptors (i.e., slims) removed (n = 125); female-oriented without brand imagery or descriptors (“plain”; n = 122); and standard non-female oriented (n = 124). Participants rated 8 cigarette packs on perceptions of appeal, taste, tar, and health risks; and answered questions about smoking and weight control and attitudes towards smoking. Results of the study indicated that women found the female-oriented packs most appealing. Participants also believed that the female-oriented packs had fewer health risks than the same packs with descriptors removed. Women who viewed the plain packs were less likely to believe that smoking helps people control their appetites compared to women who viewed the female-oriented and non-female oriented packs. Women with more weight concerns were more likely to believe in a relationship between smoking and weight control. Overall, this study demonstrates that as packages become “plainer” they become less appealing. Women viewing plain packs were less likely to endorse the belief that smoking can be used for appetite control, and that smoking helps people stay slim; and as descriptors were removed, packs were perceived to have more health risks. Results of the study extend the evidence base on the impact of cigarette packaging on women, and provide support for the implementation of plain packaging to reduce package appeal and faulty beliefs about smoking.