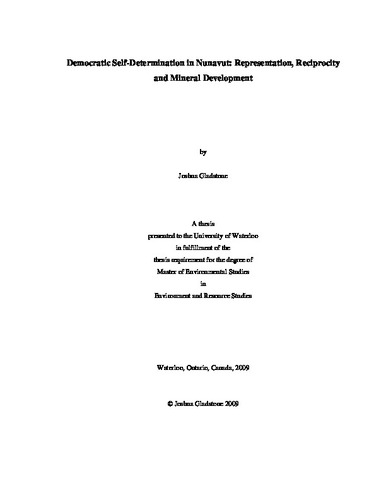 Inuit exercise a significant degree of self-determination in Nunavut through the Nunavut Land Claims Agreement, particularly in the area of non-renewable resource development. Self-determination is linked to both Inuit and Canadian identity and conceptualized in its democratic form as relationships of autonomy and interdependence mediated by resource management institutions. This thesis argues that democratic self-determination depends on local experiences of reciprocity and legitimate institutional representation. Nunavut’s institutional actors have the potential to establish locally acceptable norms of reciprocity and representation through (quasi-) constitutionally mandated Inuit Associations, an Inuit public government at the municipal and territorial levels, and resource co-management boards. Using a qualitative research methodology involving document analysis, semi-structured interviews and participant observation, this thesis explores how residents of Cambridge Bay, Nunavut, are experiencing democratic self-determination from the perspectives of representation and reciprocity. Results indicate that conflict between municipalities and Inuit Associations over the distribution of resource benefits can overshadow attitudes of reciprocity between public and Inuit spheres. Although both Inuit Associations and public governments are seen as legitimately representing local interests in resource development, each have distinct roles: Inuit Associations negotiate Impact and Benefit Agreements with industry as a matter of right, while public government’s role is the responsible delivery of social services. The legitimacy of Inuit Associations as representatives of Inuit interests was challenged by a minority of research participants who expressed concerns about elitism and unaccountability of Inuit officials, and educational barriers to non-elite participation in decision-making. Meanwhile the criticisms registered against the public governments illustrated contemporary attitudes of resentment based on a history of colonialism and distance from centre to periphery. The Nunavut Impact Review Board was found to be a valuable mechanism for managing Inuit-state relations in its ability to foster trust, though its ability to determine the just distribution of resource benefits is circumscribed. Ultimately, this research suggests that from the perspective of reciprocity and legitimate representation, the birth of Nunavut should not be considered an end to the struggle for greater local democratic control over economic and political destinies.