The Emergence of Life(?) 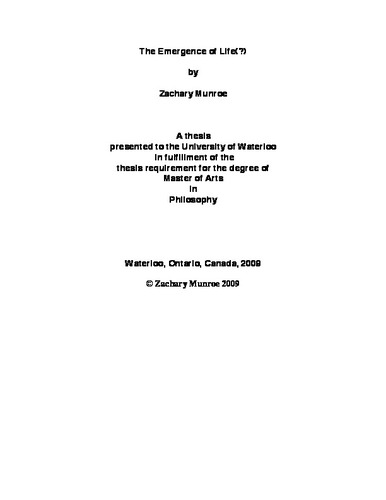 While emergentism is a frequently debated and contentious topic in some areas of philosophy, it is not discussed as often in the sciences. Where it does appear in scientific literature, it is usually a weak formulation that admits as emergent many entities and properties that would not be considered emergent under a stronger formulation. Premature admission of this sort sometimes occurs in the context of physics, but it is more likely to occur in higher-level sciences like biology. In this thesis, I examine the claim that life, a fundamental biological feature, is emergent. In order to do this, I begin by examining what counts as life. I settle on three features that are necessary for life as we know it, and I show that the smallest unit of life is the prokaryotic cell. I then examine the received view of emergentism and identify its key tenets. I consider two of these in depth, as they play a crucial role in my argument. Finally, I consider weaker formulations of emergence found in scientific literature in order to contrast them with the robust philosophical notion developed within this thesis. I argue that, based on a strong formulation of emergence, life should not be considered emergent, though some may dispute this position if a weaker version of emergence is adopted.